Cult of the Damned

On the outskirts of Andorhal Arthas spots cultists around a gold mine. After chasing them off he begins setting up camp in order to explore Andorhal and find out what’s going on.

Explore Andorhal – The Undead have built a base outside of Andorhal. Break through it and enter the town.

Confront Kel’Thuzad – Find the necromancer and kill him.

1) Claws of Attack +6 can be found with the Forest Trolls to the south east of the map.

2) A Potion of Mana can be found with the Enforcers to the west of your base.

3) Scroll of Protection in one of the Forest Troll huts.

4) Potion of Healing in a Gnoll hut.

5) Find the Rock Golems for a Ring of Protection +2.

6) Timmy, in a cage in the south of Andorhal Town has a Ring of Superiority for +1 Strength, +1 Agility and +1 Intelligence.

Cult of the Damned Walkthrough

Being building your base and take a small team with Arthas to the east for some treasure. The Forest Trolls to the far east carry the Claws of Attack +6. The best weapon so far. To the north of the Trolls are some Gnolls and also a Goblin Merchant where you can buy Scrolls of Protection, Wands of Negation and Potions of Mana.

In your base once your Town Hall has been built train a few more peasants. You’ll also want to build a Lumbermill, upgrade your Town Hall to a Keep and then build a Workshop so you can train Mortar Teams.

There are two other mines you can use in this map if you do start to run out of gold but I didn’t find it necessary. There’s another gold mine to the east and one in the north-west already being used by the Undead.

Upgrade your weapons and armor in the Blacksmiths and gather a small force to take out the Undead base to the north and west of your camp. Make sure you bring along at least a couple of mortar teams to deal with the Undead buildings. 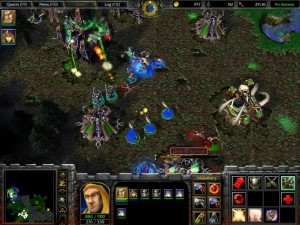 While you’re getting prepared the only attacks will come from the north west of your base. Send your forces to take out the Undead base.

Target the Halls of the Dead and the Spirit Tower with your mortar teams first as they are really the only things that can hurt you.

Once you’ve taken out the Undead base move to the north-east into Andorhal.

On the south side of town is a cage. Break it to free Timmy who has transformed into one of the Undead. Kill him for the Ring of Superiority.

Head through the town to the north to find Kel’Thuzad protected by four Abominations. He is very weak so you can take him out in a couple of hits to end the campaign.

Continue on to the next campaign, the March of the Scourge.