Ravages of the Plague

A little further north of Strahnbrad Arthas waits for Jaina so that they can investigate the effects of the plague.

Investigate Villages – Check out the villages along the King’s Road and of course keep Arthas and Jaina alive throughout the campaign.

Destroy the Grain Warehouse – You need to destroy the source of the plague in this area, the storage house for grain. It’s guarded by a few skeletons and an Abomination.

Fountain of Health – Talk to Alric after defeating the bandits for this optional quest.

1) To the east of the starting point is an Ogre Mauler with a Potion of Healing.

2) The Bracer of Agility +1 can be found by killing the sheep in the Ogre camp.

3) Once you rescue the villagers from the bandits you’ll be given the Potion of Greater Healing.

4) After crossing the river in the north-east tear down the Murloc hut for the Maul of Strength.

5) The tent in the Bandit’s camp to the north has a Scroll of Protection.

6) One of the skeletons attacking the Mortar Team will drop a Scroll of Healing.

7) Mantle of Intelligence +3 out in the open to the west of the Mortar Team.

Ravages of the Plague Walkthrough

From the starting position head straight to the east and a little to the south to take on the big beefy Ogres. One of them will drop a Potion of Healing which you can give to Jaina to start filling up her inventory. Kill the sheep in the Ogre camp for the Bracer of Agility +1. 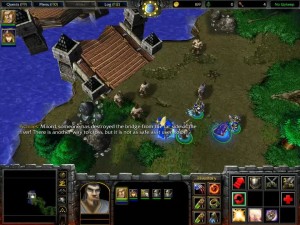 Continue along the path to the north and speak to Stacie, one of the villagers. She’ll tell you there’s something strange going on at the bridge ahead.

Once you reach the bridge Achilles will tell you that someone has broken the bridge from the other side. There’s still a way to cross but it’s more dangerous.

You’ll be shown a location to the east. Head to the east and take out the bandits attacking the villagers. Once you kill the bandits a villager will give you the Potion of Greater Healing.

Take your party to the north and talk with Alric who will tell you about a nearby Ancient Fountain Shrine that restores health. This opens up the option quest to find the Fountain of Health. The fountain is to be found in the far north west.

Proceed to the north and take out the Murlocs in the river. The Murloc camp a little further on is where you’ll find the Maul of Strength. Attack the Murloc hut to find it.

Head now to the West and feel free to take out the Bandit’s camp to the north. In the tent is a Scroll of Protection. 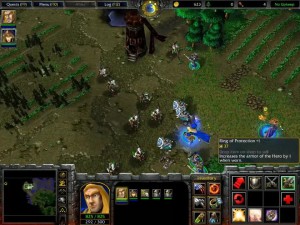 Continue west into the plagued village. There are Regional Defenders protecting the village from an army of Skeleton Warriors. These skeletons are as easy as pie to take out so you want have any trouble carving through them like butter.

Keep the Defenders alive and you’ll pick up three more footmen to add to your group.

If you keep heading to the west you’ll see a Potion of Mana in a village clearing. This is a trap but it’s really nothing to worry about. Run straight in with your full force and take out the Skeleton Warriors who come out from behind the buildings. 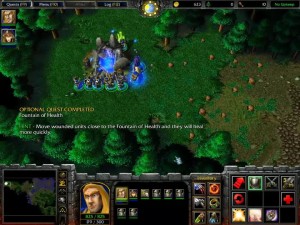 A little to the north is the Ancient Fountain Shrine or Fountain of Life. The fountain is guarded by 2 Skeleton Warriors which you should be able to take out very easily.

Rest your troops here to heal them up before continuing. This will complete the Fountain of Life optional quest.

Continue walking to the south to find out about the second main quest for this campaign.

You’ll come across a plagued granary which is causing the land around it to die. Could this be how the villagers are turning into undead?

To the west you’ll encounter some Skeleton Archers and run into a Mortar Team who will be very handy at turning that granary into dust. Protect the Mortar Team from the skeletons. One of them will drop a Scroll of Healing.

Just to the west of the Mortar Team is a Mantle of Intelligence +3 right out in the open. 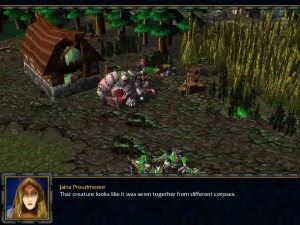 The Grain Warehouse is to the north just past the water fountain. The archmage Kel’Thuzad is there but will run away when you approach him. There’s still an Abomination to deal with so send your troops in to take the big guy out. He has over 1,000 health and packs quite a punch. Use Jaina’s water elemental to help you out.

After defeating the enemies tear down the Grain Warehouse to complete the mission.

In the next campaign you’ll be traveling to Andorhal for the Cult of the Damned.