March of the Scourge

Arthas and Jaina reach the village of Hearthglen to find that the local population have been eating the infested grain. Half of them turn into Undead and begin attacking the village.

Destroy the Grain Caravan – Grain is being delivered to nearby villages. Stop it before it reaches the next town.

1) A crate near the western entrance contains of Scroll of Healing.

2) A small group of Murlocs are holding someone prisoner to the west. Kill the Murlocs for a Potion of Mana and free the prisoner for the Boots of Speed.

3) A Fountain of Health can be found in the north-west corner of the map. The ogres that attack you there will drop the Gauntlets of Ogre Strength +3 and a Potion of Greater Healing.

4) To the south of the fountain in the far south-west corner of the map are three more ogres with the Periapt of Vitality.

March of the Scourge Walkthrough

You begin this mission in the midst of battle. Jaina has run off to alert Uther but it will be 30 minutes before he arrives. 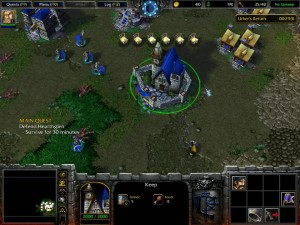 Half of the villagers have been turned into Undead so try to take them out without losing too many troops. Heal any footmen up that get too low on health with Holy Light to keep them alive.

Jaina’s inventory is left in the middle of town so you may want to collect the best of her items if Arthas has any slots remaining.

Begin by training more peasants as you’ll need as much gold and lumber as you can get for troops and buildings.

A small farmhouse to the south has three villagers who will turn into footmen and join you when you get close to them. Build a few more farms so you can handle the extra units you’ll need for this misison.

After about 10 minutes an Undead caravan will be spotted on the west side of the map. You’ll need a small force alongside Arthas to take out the caravans as they pack a mean punch. 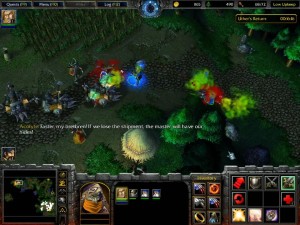 The caravans will slowly move to the north and east of the map. You’ll have about 10 minutes to intercept them and destroy them. This sounds easier than it is because every minute or two undead will begin attacking your base.

Keep the north and north-west entrances to your base well guarded, preferably with mortar teams behind your footmen. Have peasants repairing the towers as you’ll need them to last until the very end.

Bring Arthas and his loyal men to the north and then along the path to the west until you come across the caravan. Scrolls of Protection and Potions of Healing will help. This caravan group can decimate a small force in seconds so make sure you have enough firepower to take out the caravans quickly.

Your reward for destroying the caravans will be the Medallion of Courage and the Scroll of Town Portal.

If you need more potions or scrolls you can visit the Goblin Merchant to the north of your base. Once you’ve stopped the caravan you want to be focusing on bolstering up your defences. You can build a few more Guard Towers and make sure you have plenty of troops.

The Undead will continue attacking every one or two minutes until the timer gets down to about 40 seconds when a big wave of Undead will attack. This is a good time to turn your peasants into Militia to help out with the defence.

Pull Arthas back if he starts to take too much damage and try to hold out as best you can until Uther arrives with reinforcements.

In the next mission you’ll come face to face with Mal’Ganis for The Culling.