This is the last chapter of the bonus campaign. There are only two quests to complete so it’s a shorter Act than the first two.

Quest 1: Seas of Blood
Objective: Secure the Goblin Shipyard and Destroy the 6 Battleships

Your first task is to work your way around the island to the east, destroying the Human buildings and towers as you go. Once you destroy the Keep and other buildings you’ll get access to the Goblin Shipyard which will supply you with three Orc Juggernauts and two Orc Frigates.

Break the barrels north of the Shipyard for the Glyph of Omniscience which will reveal the entire map. The location of the Battleships are shown below. 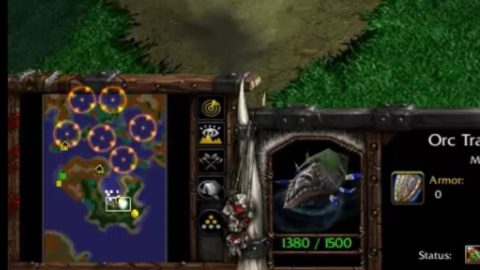 Send your navy out to hunt down the enemy Battleships. If one of them is destroyed it will be replaced at the Goblin Shipyard. You can use the Transport to take your heroes across to the other islands. It makes it easier to destroy the Towers this way.

Once all of the Human Battleships have been destroyed the coast will be clear for your main force to make an attack on Proudmoore’s land.

This is a lane attack map and is pretty fun to play. The Ogres, Tauren and Orcs will each have their own base and will advance towards Admiral Proudmoore on their own. You only control your heroes and must help the horde push through towards the Admiral.

On their own the horde will lose the battle with the Humans so it’s important that you keep a hero or two on each of the lanes. If you leave them alone for too long the Humans will actually push through and start destroying the bases.

As you push forwards down the lanes destroy the towers along the way. This is where the Necklaces of Spell Immunity come in handy and will keep your heroes alive much longer. Some of the towers have 4,000 health so it is quite a mission to push forwards.

Jaina’s buildings are the grey buildings. Don’t attack them because if any of them are destroyed you’ll lose the mission. Instead target the green buildings along the sides of each lane. Once you take out the green Barracks your path towards the Admiral will be that much easier.

When you reach the Admiral take out at least two of the four towers guarding him. He also has Elite infantry protecting him. Try to take out the Elite infantry first as they really pack a powerful punch. Then go for the Admiral with everything that you’ve got. Eventually he’ll fall and the mission will be complete.

That’s it for this expansion, The Frozen Throne. I hope you enjoyed this walkthrough and make sure you check out some of the other amazing games!