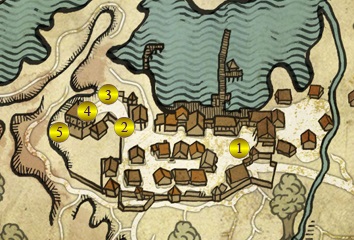 After rescuing Zoltan and Dandelion in the quest By the Gods – Stringing Up Sods you’ll talk with Officer Loredo (#1) who agress to discuss things with you after dark. When you’re ready enter through the gates to his Compound (#2) after 21:00. You’ll have to leave your weapons in the chest by the gate but you can pick them up later. Roche will join you as you enter the gates.

As you walk into the compound Roche will notice a working Ballista (#3) and ask you to disable it. The details of this quest can be found in The Ballista.

Speak with Roche (#4) again and you’ll head up the stairs to speak with Loredo. The guard says he’s busy and to come back later. Talk to Roche again once you’re downstairs and a man will interrupt you to tell you about part of a Kayran trap that Loredo is hiding out the back.

Roche will distract the guard protecting the Back Yard (#5) area so you can sneak past. There are more guards up ahead so be careful. The first guard should be just ahead with his back turned towards you. Sneak up behind him and knock him out. You’re then free to look in these windows and spy on Loredo’s mother. She appears to quite mad, and also some kind of witch.

The next guard is around the corner but frequently heads to the far wall to take a pee. Sneak up behind him and knock him out as well. Climb up the ladder near here and look in the window on the first floor to spy on Sile and Loredo and here a few bits of important information.

There are many lootable crates and chests in the back yard and some valuable equipment such as the Astrogarus’ Armor. The Iron Frame is also located in one of the chests. Use the quest tracker in the map to find it’s exact location.

When you’re done head back to Roche and tell him what you’ve learned. It’s time to meet Loredo but Roche isn’t invited so you’ll need to talk to him alone. There’s a post box in Loredo’s room with a Private Letter. You can only open the post box if you have the key from the Mystic River quest. The letter tells you that Loredo is working with the King of Kaedwen, Henselt, and isn’t worried about the death of King Foltest.

During the chat with Loredo you’ll learn about the Prison Barge with Scoia’tael prisoners on it. He also asks you to talk to Zoltan to try and find out the location of Iorveth. When you are done talking to Loredo it will be time to leave the compound. Make sure you pick up your swords on the way out.