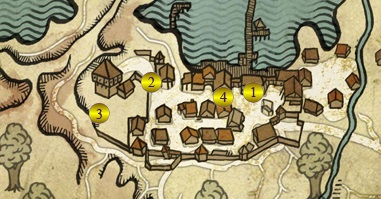 You can meet King Ziggy outside the Tavern (#1) after 21:00. Speak with him and he’ll take you to the gate to Loredo’s Residence (#2). Before you enter the residence you’ll need to put aside your weapons. Don’t worry, they’ll be waiting for you when you return.

Make your way to the Fighting Pit (#3) where you’ll participate in the tournament. Your first two opponents will be Twigs and then Matho. They’re both pretty easy to defeat. You’re next opponent is Tassledick, not much more difficult than the first two.

After defeating these three opponents Loredo will pull you aside and ask you to lose the fight because he’s betting against you. He offers to share the winnings. If you refuse to throw the fight Loredo will threaten you.

The last fight is against Zdenek. He was the best fist fighter in the first game. Once you defeat him you’ll win 200 Orens and receive 100 experience points. One the way out of the estate remember to loot the chest and get your weapons back.

If you refused Loredo’s offer he’ll have a few thugs waiting for you on the way to the tavern (#4). They should be no match for Geralt. Once you defeat them the quest will be complete.