Death to the Traitor 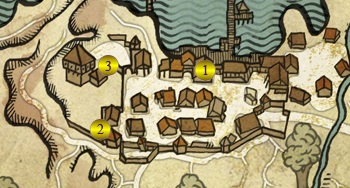 After Roche explains his plan at the Blue Stripes Lodge (#1) your goal will be to infiltrate Loredo’s mansion, capture the Merchant and kill Loredo. Ves is going to act as a prostitute to get inside the mansion.

Make your way to the secret entrance to Loredo’s Mansion (#2). You can only enter after 20:00. One of Roche’s men is there guarding the entrance. Climb the ladder and drop down the other side. You’ll soon see a girl, Helena, running behind a house, followed by the Merchant. Sneak up on the Merchant and knock him out.

Follow the path the girl took around the back of the house. There are a number of guards close by to the mansion but if you’re careful you can make your way to the entrance without fighting them.

There will be a couple of guards along the way that you need to knock out. There’s also few guards sitting around near a fire on the other side of the house. It’s best to keep away from them although whether you kill them or avoid them won’t make any difference to the storyline.

Helena is located at #3. You can knock out the guard and use the key to open the gate or climb over the wall to her. She’ll tell you that things have gone badly for Ves and that Loredo has trapped her in the mansion. She also tells you that Loredo’s mother has the key to the upper areas of the mansion.

To get into the mansion jump up onto the platfrom behind Helena and go through the window. This is the ground floor level. When walking around in the mansion make sure you avoid going near buckets or bottles because tipping them over can alert the guards.

In the next room you’ll find Loredo’s mother, Marietta. When you ask her for the key she’ll throw a powder in your eyes. Use the QTE to avoid her attack and kill her. You can now loot the room and find the Key.

Head upstairs to the first floor. This is the guests quarters. You can knock one of the guards out and fight the other two or just ignore this floor and sneak up to the second floor.

The second floor is reserved for Loredo’s bodyguards. They key to Loredo’s room is found in a chest on the other side of the room. If you’re very careful you may be able to reach it without having to deal with the guards. If they wake up run back to the doorway or stairs so you can take them on one at a time.

Make your way up to the third floor where Loredo has his sleeping quarters. You’ll see Ves tied up. As you enter she’ll scream out something about a trap. Complete the QTE to dodge Loredo’s halberd and then get read to fight. He’s not too hard to defeat. Dodge or block his blows and use spells if necessary. Once he’s defeated loot his body and then release Ves. Loredo also has a Key to the Mail Box downstairs where you can take one of his private letters if you don’t have it already.

In the next room you’ll find the Elven girl that was kidnapped by Loredo a year ago. She’s about ready to give birth so you’ll need to get her out of here quickly. Just as you’re leaving her water breaks. She and Ves will need to remain here while you get help.

Make your way back down the mansion, clearing out Loredo’s thugs as you go. Take the exit leading out to the courtyard and help the Soldiers finish of Loredo’s men. Roche will explain why he was late. He had a duel with Iorveth and lost. The Scoia’tael where successful in freeing him.

After the baby is born the elven girl will kill herself. The baby will be taken to Seherim in Lobinden and you’ll travel with Roche, Ves and the other Blue Stripes to Vergen for Chapter 2.