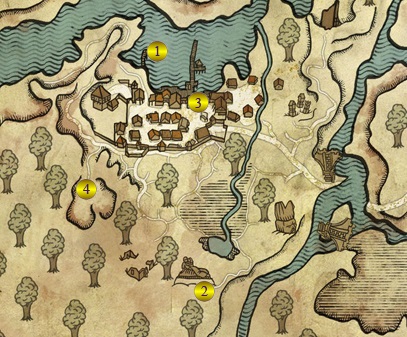 This quest begins in the Prologue and continues throughout Chapter 1 and 2. You’ll get into it once you finish the Indecent Proposal and The Kayran main quests.

Once you receive your reward for killing the Kayran Triss will appear and inform you that one of Iorveth’s men, Ciaran, has been captured and is being held in the Prison Barge (#1).

Follow Triss to the barge. The Soldiers may not let you in so you can try to explain to them the situation of use Intimidate. Head below deck to find Ciaran. He’s been severely wounded but you can heal him just enough so that he can speak. Triss will cast a spell and you’ll need to use the Axii spell.

Once Ciaran can speak he’ll tell you that Letho betrayed the Scoia’tael and killed a group of them. After the conversation Geralt will have another vision explaining a little more about what happened to Yennefer.

Ciaran mentioned that Roses of Remembrance grow near to the Elven Ruins (#2). Triss says that the petals can be used to restore Geralt’s memory. Triss offers to accompany you to the ruins. You can find details for this quest in Rose of Remembrance.

Once you have the rose go back and meet Zoltan in the Tavern (#3) and ask him to set up a meeting with Iorveth. He’ll be hesitant at first but eventually agree to take you to him.

Follow Zoltan out into the woods until you reach the Scoia’tael who’ll ask for a password. They’ll agree to meet you in a clearing. The problem is this is where the Arachas lives.

Follow Zoltan to the Clearing (#4) and prepare for a battle with the beast. The Arachas is not too difficult to defeat and often gets distracted by Zoltan, making the fight much easier. If it comes charging at you use the Yrden or Quen sign.

Once the Arachas has been defeated Iorveth will appear. After your discussion with him he’ll ask if you’re ready. So no if you want to complete any other side quests and to loot the Arachas.

Once you’re ready to continue meet Iorveth just outside the Elven Ruins (#2). He’ll decide to let you tie him up and take him to Letho as a prisoner in order to trick Letho. Take Iorveth inside the ruins and meet with Letho. He’ll provide a lot of information about the Kingslayers, as well as hints that Geralt had known Letho in the past.

During the talk Roche and the Blue Stripes will arrive. As the battle begins you have a few seconds to decide whether to help Roche or Iorveth. This isn’t the final decision but it will affect the storyline.

If you help Iorveth you’ll give him a sword so that he can fight back and escape. Loredo will be enraged and the humans will begin killing all non-humans back in Flotsam.

If you help Roche you’ll punch Iorveth, resulting in his capture. Back at Flotsam there’ll be a celebration.

While the fight is going on you and Letho will fall down into the lower bathroom of the ruins. He’s a really tough opponent and uses Witcher spells and bombs whenever he can. You’re not supposed to win this fight but you do need to bring him down to about half health.

Letho’s Aard will knock you off your feet and cause damage. His Igni has a blast radius and he’ll often use Quen to protect himself.

The best strategy to defeat him is to use the Aard sign. This will give you enough time for 2 quick strikes and one heavy strike. Use Aard again followed by 3 strikes. Roll away if you run out of Vigor and dodge away until your Vigor regenerates. Rinse and repeat until the cut-scene.

No matter what happens Letho will win but let you live. He runs off to kidnap Triss and force her to teleport him to Vergen. This is described in the Where is Triss Merigold? quest. You can either ask Roche or Iorveth for help which starts the At a Crossroads: Vernon Roche or At a Crossroads: Scoia’tael quests.