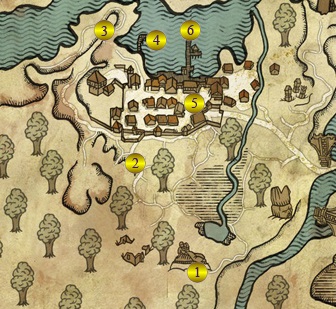 This quest will be given if you choose Iorveth in the At a Crossroads: Scoia’tael. If you chose to go with Roche you’ll be given the Death to the Traitor quest instead.

You’ll begin at the Elven Ruins (#1) where you make your plans to assault the harbor and take the prison barge. You can suggest your own plan, if Iorveth hasn’t been captured, to pretend to take him as a prisoner so you can get close to the barge without a fight. Whatever your plan go and meet up with the elves at the Meeting Point (#2).

If you suggest your own plan you’ll meet Iorveth at the Meeting Point (#2) and pretend to take him as your prisoner through the town. You can avoid most of the fighting this way. One of the soldiers will slap Iorveth. You can respond using Persuasion, Intimidation or the Axii sign. Once you’re on the boat Iorveth will be freed and you’ll fight the remaining soldiers. During the fight Loredo will set fire to one of the towers with elves trapped inside. Skip to ‘Loredo or the Elves’ below.

If you go with the main plan your company will split up and you’ll head to the Cliffs (#3) overlooking the harbor. On the way you’ll need to deal with a few of Loredo’s soldiers. Once there you’ll see the Blue Stripes ship sailing away

You’ll split up again and if Iorveth was with you he’ll start the attack. If he was captured he’ll be tied up to the ship and you’ll need to rescue him. Make your way towards the Prison Barge (#4), killing the soldiers along the way. They’re quite weak and most of them can be killed with a couple of hits.

Once you reach the barge a cut-scene will show Loredo setting fire to a tower where elves have been tied up. You can either chase after Loredo or free the elves, but you can’t do both.

Loredo or the Elves

If you decide to free the elves climb up the tower to the top and quickly untie the three elves. The elves and you will jump out of the window into the water below. You’ll be picked up by Iorveth and sail away to Vergen.

If you chase after Loredo you’ll have to kill a few soldiers blocking the path to the Square (#5). Loredo has a long halberd but he’s not that tough. After killing Loredo take one of the Boats (#6) back to Iorveth’s ship. This will complete chapter 1.