After defeating the Griffin and meeting up with Vezimir at the Inn in White Orchard you’ll travel with Yennefer and a Nilfgaard patrol for an audience with Emhyr var Emreis, the Emperor of Nilfgaard.

When you reach the royal palace you’ll be bathed by several beauties before being questioned by Morvran Voorhis. If you have imported a save from a previous game this conversation will be shorter as many of the events will already be known.

If you started without importing a save file Voorhis will ask you a few questions to determine if you killed or saved Aryan La Valette, if you choose Roche’s or Iorveth’s path and whether you saved Triss, Anais La Valette or Saskia. You’ll also be asked if you spared Sile de Tansarville or if you killed the Witcher Letho.

The answers to these questions or your decisions in previous games will have a small role in determining some future dialogue options and what characters from the past show up again.

After the questioning you’ll be taught some etiquette and then asked to choose an outfit which you can find in the nearby chests.

When you finally meet the Emperor you can choose whether to follow Voorhis’ advice and bow or just ignore him. Emhyr will ask you to find his daughter Ciri who is being chased by the Wild Hunt. 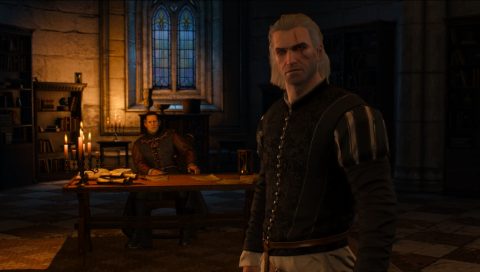 After the meeting you’ll have a chance to speak with Yennefer. She is going to Skellige to investigate an explosion while your search will begin in Velen.

Make sure you loot all of the containers in the palace and keep the formal wear because it may come in handy if you need to dress up again in the future.