The Beast of White Orchard

Some of the objectives in this quest can be skipped if you happen to come across the locations earlier, such as where the patrol was attacked or the location of the Griffin’s nest.

Once you’ve progressed through the Lilac and Gooseberries quest to the point where the Captain of the Nilfgaard Garrison asks you to deal with the Griffin you’ll be given some markers showing you what you need to do next.

The Hunter’s Hut will appear on your map after accepting the quest to defeat the beast. The Hunter is out so use your Witcher senses to follow the tracks out into the woods. When you catch up with him either help him deal with the Dogs or say you’re in a hurry and he’ll take you straight to where the Patrol was attacked.

Use your Witcher senses to examine the site. The Bottles on the ground indicate the Nilfgaard soldiers where celebrating something. The camp fire suggests they were camping the night. The blood soaked ground tells you there was a lot of damage and the tracks show you where the soldiers came from.

Follow the tracks across the broken bridge and up the hill to the Griffin’s nest. It appears the soldiers killed one of the Griffins and went back to the camp to celebrate. The Griffin they killed had a mate and that’s the one that’s out causing mayhem.

Speak with the herbalist Tomira and she’ll tell you the location of Buckthorn which can be used to lure the Griffin. Make your way to the part of the river shown on the map and dive down to collect the weed. Once you have it return to Vesimir and tell him you’re ready to fight the Griffin.

Battle with the Griffin

Vesimir tells you that he’s spoken with a local farmer and has worked out a good spot to lure the Griffin out. Meet Vesimir at the location and wait for the battle to begin. During the wait Vesimir will give you a Crossbow. This is the only weapon that works under water but can also be used to shoot at the Griffin to make it land. 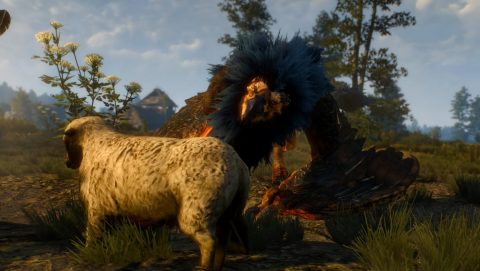 I found the best way to deal with the Griffin was to wait for it to swoop towards you and then cast Aard to make it tumble to the ground. You can then get in a few shots before it flies off again. Using the Crossbow also works.

Once the Griffin is down to about half health it will fly off to a nearby windmill. Jump on Roach and chase it down. Use the same strategies to finish it off. Once you’re done Geralt will take the head as a Griffin Trophy.

Return to the Nilfgaard Garrison for your reward and to learn that Yennefer went to Vizima.