There’s not much to worry about here. Make your way up the tower to face the Collector up the top. 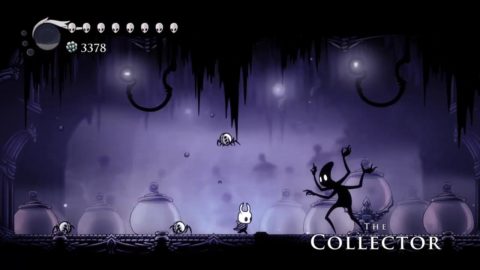 When the Collector jumps towards you there’s enough space to run underneath, turn around and hit him again. This boss is fairly slow so shouldn’t be much of a problem. Set a Dream Gate outside his room so that if you do get killed you can teleport back immediately. The Collector will put your shade in one of the jars so you’ll need to rescue it.

Once the Collector has been defeated continue up the rest of the tower to rescue 3 Grubs and find the Collector’s Map which shows you the location of all Grubs still needing to be rescued.

Make your way up the left side of the Watcher’s Spire first, taking out the Guards along the way, and then drop down to the Lever which opens the door to the right. Head up the right side and take the exit above. If you run along to the left you can hit the Lever to open the door between both buildings.

Head back and continue up the Watcher’s Spire. Take the lift up to the next level. If you go right from the top of the lift you’ll find a Grub, not shown on the map above. Going left from the lift will take you to another lift which takes you up to the Watcher Knights. 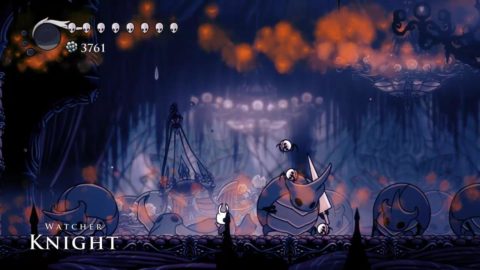 Before taking on the Watcher Knights jump up the wall before the arena and break open the roof. Hit the rope to drop a chandelier on one of the Knights. Now you’ll only have to face 5 instead of 6.

The Watcher Knights have 220 health each. I recommend waiting until you’ve found the Shade Cloak in the Abyss before facing these knights as it can be a tough battle.

The Knights have three attacks, a double slash, a roll and a bouncing roll. To make matters worse you’ll be facing two of them at a time. Before a knight does a bouncing roll it does a little bounce first, giving you time to get out of the way.

Hitting them from the air is a good strategy as they only have one air attack. Quick Strike will also make this battle much easier. Try to stay in the opposite corner to them and use the Shade Soul to hit both of them at once.

Once the Watcher Knights have been defeated you can continue up the tower to take out Lurien the Watcher.