Chapter 1: A Knight To Remember 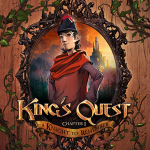 If you’re a King’s Quest fan you’ll love playing chapter 1 of King’s Quest (2015). In this first chapter of the new King’s Quest and older King Graham recounts his most daring stories to Gwendolyn and her cousin.

As you proceed through this chapter you’ll be able to choose a path that best suits you. The cut-scenes and story will adapt to the choices you make. I try to mention the various choices and their consequences in the King’s Quest walkthrough below.

Dragon’s Well – Enter the dangerous lair of the dragon and bring back his most prized possession.

Entering The Tournament – Find your way to the stadium and enter the tournament.

Chivalry Test – Find out all you can about your competitors and take the audition.

Getting Prepared – We’re almost ready for the first real quest of the game but we must collect some items before we begin.

Finding the Ferocious Eye – Choosing one of the three paths by talking with the relevant townspeople we set out to find the ferocious eye.

Goblin Attack – Take out the goblin’s attacking the merchant’s wagon and find your gold coins that have been scattered around the countryside.

Duel of Wits – Take on Manny for the final challenge and win the knights tournament!

Have you finished with Chapter 1? Proceed to King’s Quest Chapter 2: Rubble Without A Cause here.