You begin the game as a small gnome in an observatory, on a green, tree-like planet. A trumpet falls from the sky and lands on the grass in front of the observatory. You’ll go and pick up the trumpet and give it a little play. The trumpet can also be used to listen to things.

You’ll be given a little tutorial on how to move about in the world. Use the scroll wheel to zoom in and out and the left mouse button to click and drag the screen around.

Use the trumpet on the tree with the hole in it to listen to the woodpecker.

Head into the observatory and climb up the ladder to your bedroom. Sleep in the bed and you’ll have a little dream about flying in a UFO.

Read the book on the bedside table to see a little story.

Climb up the ladder to the observatory and look in the telescope. You can move the view around until you find another planet. 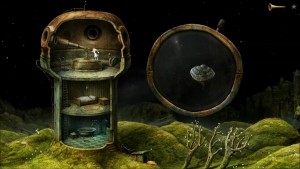 Pull the lever and look through the next window. Again browse around until you find a strange planet. Repeat the process once more for the third window. There is another planet here for you to look at.

Climb down the ladder, out of the observatory and head to the west. Use the trumpet to listen to the strange mushroom-like plant. You’ll see an image of it turning into a UFO.

Run down the mountain now to a man doing some soldering. Use the trumpet on the water bottle and the gnome will get an idea to cut it and use it for the UFO.

Talk with the man (inventor) and he’ll give you a picture image of the parts needed to make the flying ship. 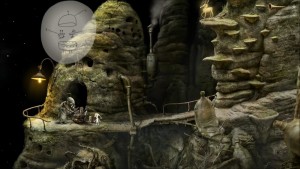 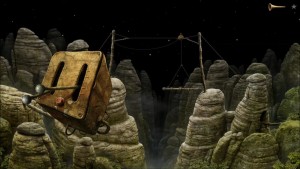 Once the height is correct swing the log from left to right using the left lever. Once you hit the base of the right pole twice it will fall down, creating a bridge between the two rocks.

Head down to the bridge and walk across to the east. You’ll come to a greener area with a strange man up in a tree. He’ll disappear and reappear somewhere else.

Use the trumpet on the central tree. There will be an odd scene with some worm like creatures and then little mushrooms will appear. The man will start picking the mushrooms.

Walk to the little stump to the right of the screen. After a little while the man will join you and ask you to play cards with him. 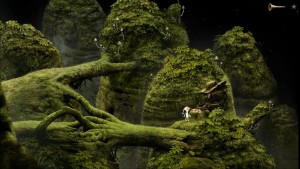 There will be a box with four slots and a number of cards below. You can pick up a card and place it in one of the slots.

Place the two people in a tent in the fourth slot. They will need to collect four bits of food to solve the puzzle. Here’s the solution.

The Moose – Same as the pig except you need to feed it the mushroom first. Give the mushroom to the moose to make it sick and then put the Man with the bow in first slot, moose in second slot and fire in third slot to kill the moose. Once the moose has been killed and cooked move it to the third slot so the two in the tent can eat it.

Having solved the puzzle the man will give you his knife. Go back to the west and down the mountain to see the inventor. Use the knife on the bottle and take the top piece to the inventor. He’ll show you a picture image of the pieces of the flying machine.

Go back to the observatory and pick up the bath. The gnome will take it back to the inventor for part of the flying machine. You still need the seat and the lever mechanism. 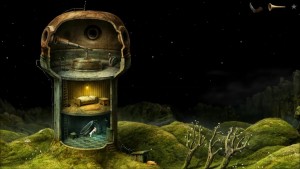 Run back to the east where you made the bridge and grab the lever mechanism. Take it back to the inventor.

Lastly, you just need a seat, but what can you use? Go back to the observatory and grab the small stool that was next to the bathtub and take it to the inventor.

He’ll finish construction of the cockpit part of the UFO. The two of you will lower it onto the large mushroom plant and you’ll fly off. Before heading to a new planet you’ll need to give the mushroom collector his knife back. You’ll automatically fly next to him so just select the knife and give it to him. Now it’s time to fly to a new planet!

Continue the journey in Part 2: Asteroid and Second Planet.