Land on the planet and get out of your spaceship. As you land a vine will grab your ship and you won’t be able to pull it off.

Walk to the west and sit on one of the cushions in front of the man in the tent. He’ll show you the image of a creature and pour you a cup of tea.

Stand up and zoom out until you can see all of the trees. There’s a small green plant with a bulb at the top of it growing on one of the trees. Pull the green bulb up until the parrots get interested. They will slowly hop towards it and begin fighting over it. 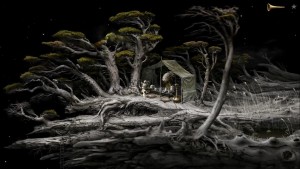 The parrots will break the bulb off and it will drop to the ground. Go and pick it up.

Walk to the east twice and use the trumpet on the hole in the tree branch that is sticking up. You’ll see an image of some kind of fight between a tree and space creature.

Walk further to the east to the end of this tree planet. Termites are walking out of their holes and back again. Start clicking on the termites until they start to sing. When a number of them sing in unison a large termite will appear. 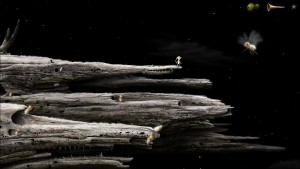 This is the beginning of another puzzle. Click on the symbol that appears in the sky after the termite flies away.

Pull the jaw down of the branch at the top and climb down it like a ladder. Climb in the large hole to the left of the screen. You’ll reappear one screen to the west. Walk out of the hole and then along the log to the east. Continue walking to the east and then turn back to enter the large hole slightly below the path you were walking. This will take you into the termite’s nest.

If you thought getting to the termites nest was hard just try and figure out what’s going on here! 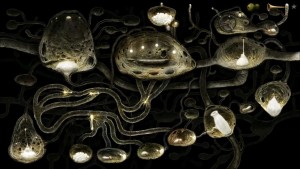 In the central chamber are four lights dangling down. From left to right if you pull the fourth one the termite will lay an egg that you can pick up. There are three tunnels you can place the egg into.

Pulling the other three lights will change the path that the egg will follow. You want to drop an egg into all three baby termite rooms at the bottom.

Pull the third light and then drop an egg in the third hole. This will drop an egg to the first termite next to the pile of eggs. He’ll eat it and send a signal up to the strange white plant in the top left. It will create a symbol. Click on it to continue.

Pull the first light and the third light until the switch underneath stands straight up. Pull the fourth for an egg and then drop it into the first hole. This will feed the second termite. He’ll eat it and send a signal to a termite on a wheel who’ll lift up the white cotton underneath him. You can now walk to the right and down the tunnel which will take you to the west. Keep walking to the west until you enter a cave with rocks.

A fly is trapped inside here. Keep pulling the rocks until the path to the west is clear and the fly escapes. 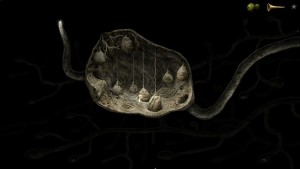 Go back to the central chamber and pull the fourth light for another egg. Pull the second light and then drop the egg into the second hole. This will feed the third baby termite. You’ll be sucked into a white container. Click on the container to be spat out and continue your journey downwards.

There are a lot of little creatures here that you can click on for some funny noises. Walk to the left and you’ll see two plants growing out of the branch and a little long-nosed creature hanging upside down on the branch. 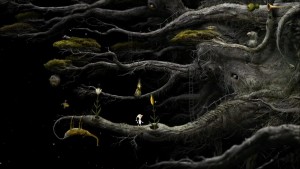 Pull up the suction cup at the end of the branch and let it go so it flings back and gets stuck on the little creature. Click on the bee hive and a bee will come out to pollinate the flowers. Click on one of the flowers and then the other. The bee will follow the pollen and some kind of yellow fruit will appear.

The bird may eat the fruit the first time you do it. You’ll need to pollinate the flower that is furthest from the bird and quickly grab it before he eats it.

Walk up the two ladders to the top. Follow the path behind the tree and follow the highest branch at the back to the left. You’ll come to another ladder. Climb up it back to the man sitting under the tent.

Head back to your ship to the east. You’ll also notice two flowers here. Click on the bee hive and then click on first one flower and then the other. The bee will follow the pollen and cross-pollinate the flowers producing a fruit like an apple. Pick it up. You should have three fruits now.

Place the yellow banana-like fruit in the hole just above and to the left of the first red flower.

Place the green fruit in the hole just below and to the left of the yellow fruit.

Place the red fruit to the right of the red flower.

All of the fruits will produce little plants. Click on the bee hive again and then click the white flower followed by the red flower.

This will produce a fruit that is a mix between the two plants. Grab it and plant it again. Keep going until the plants produce what looks like a little mandrake root creature. Pick it up.

Go back to the man under the tent and give him the mandrake root creature. He’ll put it in his tea.

Use the trumpet on the tea kettle. You’ll see a little image of how to make a bomb. The man will pour you some tea and show you how to get rid of the vine that is trapping your spaceship. Take the cup of tea.

Click on the green parrot above the tent until it poops on the tent. When the man stands up to clean it off jump over to the right and smoke the pipe. Click on the symbol and walk back to your spaceship.

Use the tea on the vine. You can now hop back into your ship and take off.

Click on the orange planet to fly towards it. Continue with Part 4: Third Planet.