Roger Wilco begins in the Bridge Training Simulator where he’s kicked out and told to get back to class. Once you leave the training simulator walk to the north and enter through the door to the right. Roger’s late for a test!

Use the eye icon to look away from the test and when the robot is looking away take a sneaky look at the braniac’s test to the right. You’ll be able to see the correct answer for this question. Continue doing this for all 10 questions until you get them all right. As punishment for being late Roger will be told to clean the Academy Crest.

Walk to the south and open the second door on the right. This is the cleaner’s closet. Pick up the Scrub-O-Matic and the Cones. Walk south and down the corridor to the right. Take the lift down to the lower floor and then place the Cones and the Scub-O-Matic on the crest. Roger will start spinning around and around. Move over all of the gold areas to give the crest a good scrub. This is a timed event so get it done quickly. 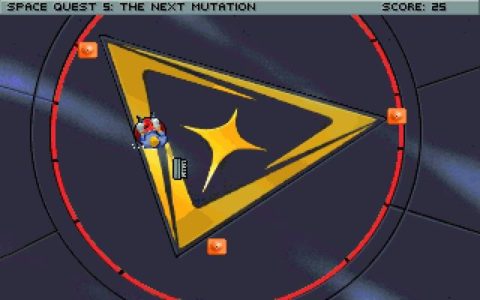 Once it’s finished Captain Quirk and Ambassador Wankmeister will walk past. When they’re done talking walk to the left and go back to the main corridor. After the cut-scene walk to the south and then look at the results posted on the wall. Roger got lucky and is now in command of the SCS Eureka!

When you sit on the captain’s chair you’ll be able to give order’s to your crew members. There are three crew on board the Eureka, Subcorporal Droole on Navigation and Weapons, Com Specialist Flo and Cliffy the Engineer. 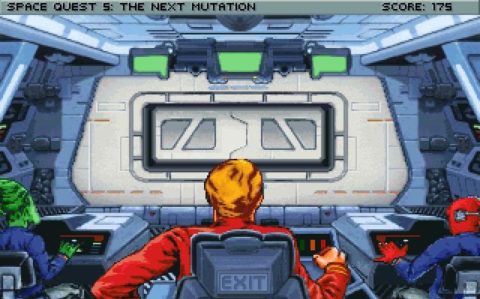 Once Droole notifies you that you are close to Gangularis command him to drop to regular speed. When you see the plane zoom past order him to active the RRS (Refuse Removal System). Flo will inform you that she’s detecting a life form in the waste compartment.

You can deal with it now or after cleaning up at the next location. Stand up and leave the bridge. Click on the control just to the left of the refuse containment compartment to open the door. The trash will fall out, along with a little acid-piddling creature that Roger will call Spike.

Take a look at the toolbox to the left and grab the Laser Torch, Hole Punch, Fuse and Antacid Tablets. Clean up the tool box so Cliffy doesn’t get annoyed.

Return to the bridge and command Droole to lay in a course for Peeyu (#92767). Go to lite speed and drop down to regular speed once you get close. As the planet passes by activate the RRS just like last time.

After intercepting the strange message make your way to Kiz Urazgubi by laying in a course for (#20011). A womandroid, WD40, has been following you and wants to get disassemble you for mail fraud back in SQ2!

Leave the bridge and go to the engineering/science room. Stand on the transporter and use the Command icon on the base of the transport to beam down to the planet.