Walk to the north-east and you’ll catch site of Ivan and the train but can’t get across to it because the bridge is broken. Walk to the right and have a look at the altar that’s been set up with stones. There’s a frozen fish stuck to it.

Continue along the path to the right until Youki chases a beaver into the water. Continue forwards and you’ll see a clearing with Branches. Pick them up and walk back to the altar with the fish. Use the Branches at the base of the stone altar and then use the Matches on the Branches to start a fire. The ice will melt and you’ll get the fish Offering.

Run back to Youki and give him the Offering. This will distract him long enough for the beaver to finish chopping down a tree. Walk back to where the beaver was and walk across the fallen tree to the other side of the river.

Continue along the path ahead, ahead once more and when you get to the broken bridge go to the right. You’ll see a cut-scene along the way. Head towards the log cabin and Kate will get a call from her mother. Enter the log cabin.

Take a look at the shelf above the fireplace and grab the Fisherman’s Guide, the Russian Doll and the Hatchet behind the doll. Head down and to the left, to the other side of the cabin. And then left to look in the kitchen. Grab the Fish Tank and head back. Open the back door and go out to the jetty.

Read the Fisherman’s Guide and you’ll discover that Orange Salmon like green frogs. Look at the fishing poles and then at the tackle box. Use the lure on the top row, far left, and cast your line out to deep water. You’ll immediately catch a fish and put it in the Fish Tank.

Walk back into the log cabin and open the front door. Uh oh! A grizzly bear!

Look out the window to the left and use the Orange Salmon on the grizzly bear. Happy with his meal the bear will walk away. Go out the front door and walk down the path you came down, to the left. Keep going until you come to the broken wooden bridge.

Use the Hatchet on the rope tied on your side of the bridge to get the Rope with Plate and then use it on the top of the tree overhanging the chasm to swing across.

Follow the path along until Youki chases a bird towards a cliff. The Bourghoff Brothers are at the top and will start throwing rocks at you until a plane almost hits them.

At the top of the cliff walk down one screen, to the left and forwards until you find the aeroplane crash. Don’t worry about looking inside it now. Head up one screen more and talk to the pilot dangling from a tree. He’s asleep. You’ll need to find some way to get him on the radio. Go back and look inside the cockpit.

Flip the dial in the top left to turn it on. The light next to it will glow red. Flip Switch B to off and leave Switch A on. This will give us the first two numbers of the radio channel. Look at the bottom three switches. Flick the far right one down and the other two up. Flick the two switches underneath so that they’re up. A green light will come on and you’ll be shown the first two numbers of the radio channel, 0 3. 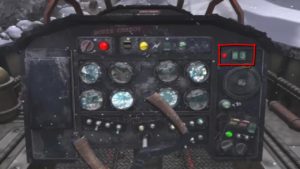 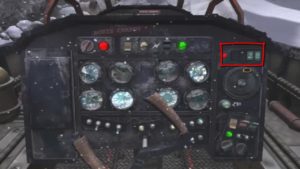 Walk down twice and to the left to go speak with Boris. He’ll tell you that you can use the Ejector Seat to make it to the train but you’ll need the exact co-ordinates to get there.

Go back to Boris and look in the cockpit. Set the co-ordinates on the left side of the panel to 80 20 and press the button underneath. This will take you directly to the train and Youki will greet you.

Walk towards the front end of the train and you’ll receive a phone call from the Colonel saying someone has been looking for you. Youki will find an arm in the snow. Pull it out to find out it’s Oscar. He’s too cold to start the train.

The back carriage is stuck so go and talk to Oscar. He’ll tell you about the uncoupling system. Walk to the rear cabin and in the center is the access panel. 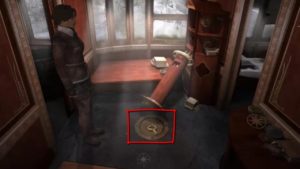 Try to open the access panel. It’s stuck so call Oscar and he’ll active the mechanism to open the panel. Have a look at the panel and to uncouple the rear cabin move the switches 1, 3 and 5, from top to bottom. 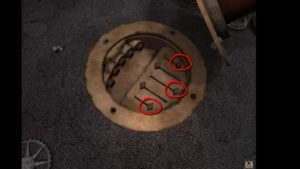 Once the rear car has been uncoupled the train will continue on its journey. It’ll come to a stop before a giant mammoth statue deep in the frozen north and the Youki will run out.

Walk to the south twice and receive a phone call from Oscar. Look in the back of the snowmobile and grab the Gauze Blanket. Look at the totem to the left and put the Gauze Blanket in its mouth to stop the howling.

Walk back down and then north west again to speak with Igor. He’ll calm down now that the howling has stopped and take off in the snowmobile. Go back to the where the snowmobile was and pick up the Ice Cleats that Igor left behind.

Walk up the ice ramp towards the Mammoth statue. Ivan will confront you. Try to talk to him a few times and then call Oscar on the phone. Oscar will toot the train and distract Ivan. While Ivan is distracted have a look a the sled at the top of the screen.

Grab the Ivory Knife and use the knife on the rope holding the sled. The ice will crack and you’ll wake up in a strange hut.