The train has stopped at Barrockstadt University and needs to be wound up again. While we’re here we can gain some valuable information about Hans and the mammoths. Talk to Oscar and then exit the train to the right.

Walk up to the cuckoo birds that are blocking the ladder. Kate will be frightened of them. Walk up two screens and cross the bridge to the other side of the train. Walk to the left until you come across the station master standing by the water. Before you talk to him grab the hook lying on the sand. 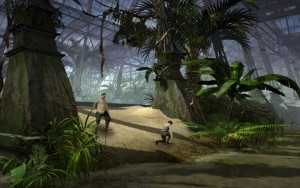 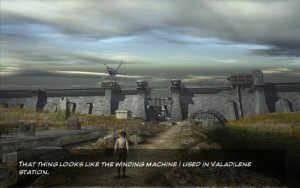 Run all the way to the right, past the train, until Kate sees a machine that looks like a train winder. Go back to the train and Oscar will have an important message for you. Follow him into the train and he’ll tell you that you’ve been summoned by the rectors who want to speak to you about your train. 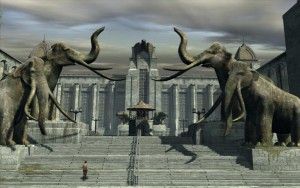 Go back up the path and walk right, to the Barrockstadt University. You’ll see some amazing mammoth statues at the entrance to the university.

Walk past the bandstand with automatons and continue into the university. There’s a few things we need to do here before we can continue on our journey.

Once inside the university walk to the left and then open the large doors to the top of the screen. You should be in the library. Go down the stairs and you should see a purple book lying at the end of one of the tables. Pick it up. This is the book called ‘Amerzone: Memories of an Expedition’  and it will give you information on the cuckoo birds. The love the forest sauvignon grapes!

Go back up the stairs and look for the ladder leaning against one of the bookshelves. Climb up the ladder and pull out the yellow book that has been placed upside down. This is ‘The Illustrated Dictionary of Plants and Mushrooms’. You’ll learn about the Yangala-Cola which can greatly increase eye-sight.

Head out of the library and continue walking to the left until you come to the room with the three rectors. Talk to them about Hans and money and they’ll offer to give you the $100 to tow the train if you an fix the bandstand that Hans built many years ago.

After talking to the Rectors leave the room and head to the other side of the university to talk to Professor Pons. Talk to him in particular about Hans and sauvignon. He’ll tell you there is no forest sauvignon in Barrockstadt but to talk to the station master. He also mentions the mammoth doll that we found in the cave.

Leave the university and you’ll get a call from Mr. Marson who wants an update on the sale of the toy factory.

Head back to the Station Master and ask him about sauvignon again. He cuts the conversation short and runs off.

Go into the train and pick up the mammoth doll to show Professor Pons. Head back to the university. Th Station Master is on the bridge. Talk to him again about sauvignon. This time he’ll tell you to go talk to the professor.

Once you reach the professor ask him about sauvignon. He’ll try to deny there is any but also tell you to talk to the rectors about it. Give him the mammoth doll and he’ll invite you to attend a lecture later. He’ll also open the door to his laboratory. Follow him in.

Look at the cabinet on the back wall on the left hand side and grab the Barrockstadt voice cylinder. You’ll also need the test tube holder and the Yangala-Cola powder which you can find on the lab bench at the bottom right.

Go back to the rectors and ask them about sauvignon one last time. They’ll admit they are growing the shrub and producing wine in the university and that the Station Master looks after the plants. 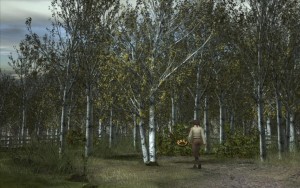 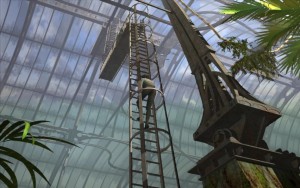 Feed the sauvignon grapes to the cuckoos that are blocking the ladder to the gangway and they’ll hop out of the way. Climb the ladder and use the test tube holder to grab the cuckoo egg that the mechanical eagle has collected.

Walk back to the bandstand and take a look at the door. Place the cuckoo egg on the scales to balance out the golden egg. Turn the wheel and the door will open. Climb down the ladder and pull the lever. That’s all there is to it. The bandstand will now be working! 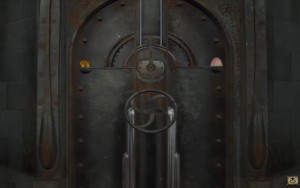 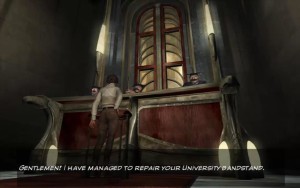 Go back to the rectors and let them know that the bandstand has been repaired. They’ll give you the $100 you need to get the train towed. Run back to the couple with the barge and hand them the money. They’re willing to tow the train but don’t know how to operate the flood gates. He’ll throw you a lock key for the lock controls.

Walk back up past the bridge to the flood gate controls. On the way Kate will get a call from her mum.

Press 4 for the Barockstadt Lock.

Press 2 to lower the water level.

To confirm your decision press *

You’ll be told that the technician is currently on holiday and you’ll need to open the lock manually. Look at the controls and use the lock key to open the glass case. You need to press the same numbers as with the phone so press #, 4, 2 and * in that order to lower the water level and open the gate. 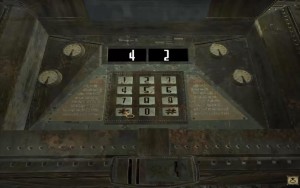 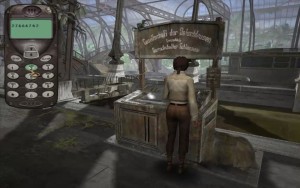 Run back to the barge and tell them that the lock is open. Once the barge has moved to the central area use the controls again. This time type in #, 4, 1 and * to raise the water level. Walk back to the front of your train and speak with the couple. Ask them for help and the man will throw you a chain you can use to hook up your train.

The chain is missing something though. It has no hook. Use the hook from your inventory on the chain and watch as your train gets towed to the winding machine. As you’re about ready to leave you’ll get a call from the professor asking you to attend his lecture.

After the lecture head back to his laboratory and pick up your mammoth doll and the pamphlet on the Legend of the Ivory Ark.

Go back to the train and make sure the voice cylinders and mammoth doll are in the right locations before winding up the train.

Go back to the train and head across the train to the other side of the tracks. Walk to the train winder, turn the wheel and then pull the lever. Dan will give you a call and wonder when you’re coming back home.

Talk to Oscar and ask him about mission and the train will set off once again. It won’t get very far until it stops as there’s a giant wall in the way! Head out of the train to the right and talk to Oscar in the booth. He’ll tell you that you need an exit visa to get past the wall. 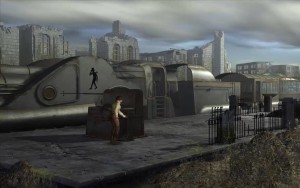 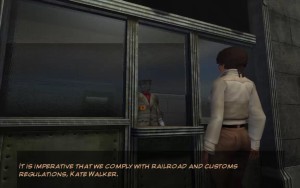 Walk around the booth and enter the door in the side of the wall. Go up the stairs and receive another call from your friend. Go across the walkway and open the door. Inside you’ll find Captain Malatesta. He’s currently not issuing any visas because he considers it too dangerous.

After talking with the captain have a look at the telescope. Use the red button on the top right to put it into focus. The horseman he was worried about is really just a dead tree.

Have a look at the table and use the wine bottle on the glasses. Then use the Yangala-Cola powder on the wine glasses. You may remember this powder helps to improve eyesight. Kate will persuade the captain to have a glass with her. He’ll then check on the horseman and see that he’s been mistaken all this time. 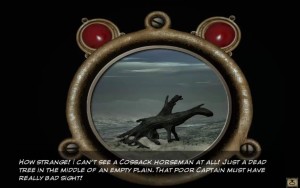 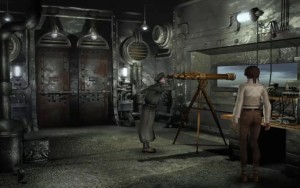 That’s all for Barrockstadt. It’s time to ride the train to Komkolzgrad.