Run forwards into the halls of the Astral Academy. Place a box on the button to create a bridge across the gap and run across it.

In the distance you’ll see two floating platforms. You’ll need to grapple onto them and hook them to the statues to keep them in place. You want to arrange them so you can jump up them to the floor above. 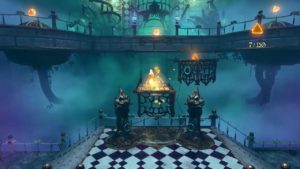 Swim up the elevator to the top where you’ll be attacked by a number of robot creatures. Pick up the trineangles through the arch first before heading to the right. Drop down to the balcony below and place the four boxes on the strange purple mirrors on the wall to create a box staircase. 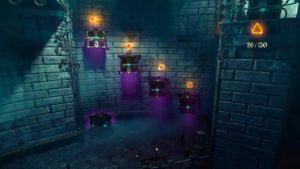 Jump up the staircase to the left and then back around the ledges above to the right to the next checkpoint and a gate that’s been closed by vines. Break through the vines and use Zoya to swing across to some trineangles. Swing back and drop down to the right.

Hook onto the bottom of the platform and swing across to grab the big trineangle. 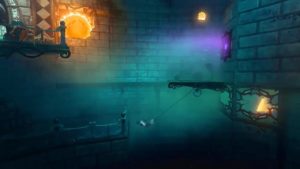 Place a box on the purple mirror and jump up to the right.

In the next section use Amadeus to pick up the large log and drop it over the edge to the right. This will lift up the platform so you can jump up to the left. You may want to drop down first because there are some hidden trineangles in the alcove below.

Jump up to the left to the next checkpoint. The wall to the left is breakable. Use the boulders to smash it open and reveal a trineangle. Now head through the arch to the springboards. 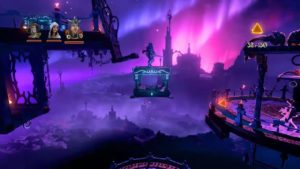 Use Pontius to stomp on the springboard until it’s high enough that you can float across to the right. Grab the trineangles and then push the lever connected to the two platforms to push the platforms in line with the bridge. Use Zoya to grapple onto the bridge and pull it down. 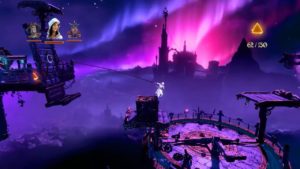 Swing across to the trineangle under the bridge on the left. Then bounce back up to the right and jump across to the next platform. Once again use the springboard to propel you to the pathway to the left and follow it down to the next book.

Head inside, swing across the platforms with wings. Place a box on the one on the left while you stand on the right to lift it up and jump across to the right to the next checkpoint.

Jump across the revolving blades to the other side where you’ll be attacked by more creatures. More spinning blades! Place a box in their path to stop them so you can jump up and grab the trineangle. 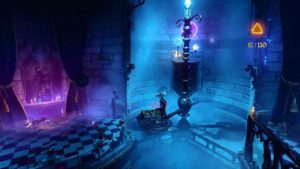 Jump across to the next checkpoint and make your way up the water elevator. At the top you’ll be attacked by a wizard and a number of creatures. Wait for the wizard to land on the floor where you can reach him and attack him. Once he and the creatures have been killed the big doors will open.

Head on through to a statue holding the Artifact of Body. Exit either to the left or right of the statue. After a small cutscene you’ll emerge on the outer walls of the Academy.

To get to the big trineangle to the left climb up the platform and shoot the rope holding the cage. The cage will drop and you can grab the trineangle. 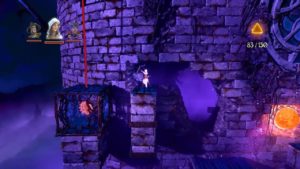 Go to the checkpoint to the right and swing across. Take the second elevator down and use Zoya to grapple onto the hook and grab the big trineangle.

Head up the elevator and grab the trineangles to the left. Then head up the ramp to the right. Flaming metal balls will roll down and you’ll be attacked by creatures from behind. Use the flaming balls to break the wall and grab the trineangles. Head up the ramp and get off near the top to the bouncy pads on the right. Jump up all the bouncy pads until you come once again to an entrance to the Astral Academy.

Inside you’ll be attacked by books and there’s another book for you to read by the fireplace. Run up the stairs and place boxes on the purple mirrors. Ride them up. Jump to the left first to find all the trineangles and then head to the right where you’ll find two platforms attached to a circle.

Stomp on one of the platforms to make it go around and jump over to the right. There is a sneaky trineangle hidden behind the statue above the platforms. To the right jump across the gap and climb up the wall. There’s a rope here holding onto a block. Shoot the rope to drop the block. If it gets stuck stomp on it a few times to reveal a hidden trineangle. 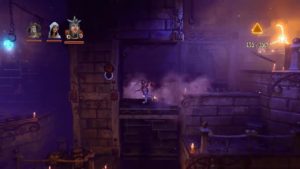 Continue along to the right. Don’t worry about lifting up the ramp to get to the big trineangle. Just climb up the wall to the right and use Pontius to float across to it. You’ll need to jump off the wall when you are close to grab it. 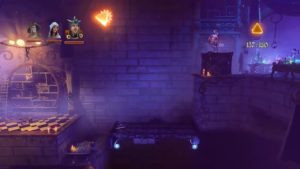 To the right you’ll be attacked by books and then come across the button  puzzle. Once all the buttons are lit up three platforms will raise on the right which you can climb up. To light up all of the buttons you need to jump on the center one and then all the corner buttons once. 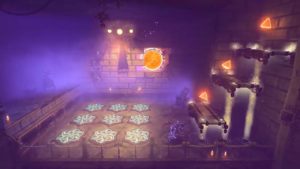 Head up the stairs and then down the hallway for the final boss fight with two wizards. Take them out to end the chapter.