After leading the horde across the Great Sea the ships have been battered and broken on the shore. Send Thrall to find the rest of the horde and meet a few new friends and enemies in the process.

Rally the Horde – Discover where the other orcs have landed.

Protect Cairne – Follow Cairne to the village and protect him from his enemies.

1) Potion of Mana in the crate at your starting location.

2) Ring of Protection +1 in a crate near the ocean. Follow the path east and south from your starting location.

3) North of starting location where the Murlocs attack is a Scroll of Protection.

6) Near the captured Troll Headhunters is another Quilboar with a Potion of Mana. 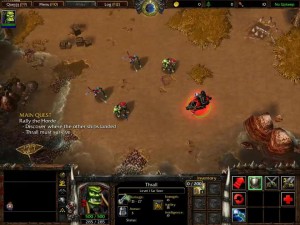 There is no base building in this first mission. You start off with a small band of orcs, Thrall, two Headhunters and two Grunts. You’ll find more of the Horde along the way. There’s plenty of treasure here so you’ll have to pick and choose what you want to bring with you.

A crate just north of your staring location has a Potion of Mana.

There are some Dragon Whelps to the east and south of your starting location. Break the crate right near the ocean for a Ring of Protection +1.

I won’t go through all of the items here. Just explore all the paths as best you can and destroy all the crates that you come across.

Sooner or later you’ll come across a Tauren being attacked by Centaurs. The Tauren are friendly to the Orcs so take out the Centaurs. It’s likely too late to save this Tauren but you’ll find more later on.

As you walk along one of the higher passes you’ll see an army of Centaurs riding by. There is a Fountain of Healing near here so you won’t need to waste any of your Healing Wards to get back to full health.

Follow the paths along, killing all of the Murlocs, Centaurs and Quilboars as you go. Eventually you’ll stumble across Cairne Bloodhoof who know’s something about the Oracle far to the north.

You won’t have any control over Cairne and his Taurens, they’ll move along by themselves. They’re as tough as nails and you should have a large horde by now so this should be fairly easy. Make your way north with Cairne to end the mission.

The two heroes decide to band together and head north towards the Oracle. Continue the journey in chapter 2, The Long March.