Cairne and Thrall head north with their tribes to the barren plains. Here they are ambushed by the Centaurs. Keep the caravans alive and defend the Taurens from attack.

Three Oases – Lead the caravan to the three oases while keeping Cairne and at least 2 Kodo Beasts alive.

1) Claws of Attack +3 from the Lightning Lizards. 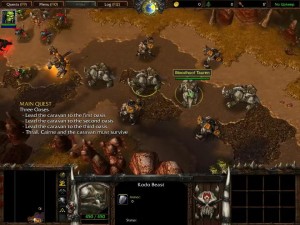 You’ll need to protect the caravan of Kodo Beasts alive while they march from one oases to the next. Luckily the oases are actually Fountains of Healing which will give you a chance to heal up the entire group when you reach them.

To help you out you’re given the location of the first oases so you know the general direction you need to head in. Sometimes you’ll be attacked from the front, others from the sides or the rear so you’ll need to keep your forces fairly central and close to the caravan.

The Kodo Beasts will move on their own. Luckily they’re also protected by strong Tauren.

Bring your forces to the front as you head out to the west because there are Centaurs up ahead. You’ll know when the Tauren are under attack because Cairne will call out. Every time he does check back with the caravan to make sure they can handle it.

The first oases is pretty close by. Stay here for a while and heal up. When you reach the oases a few more orcs will join your group.

The second oases is far to the north from the first. You will continue to be attacked while you wait so head out when you can. Head out over the river and scout ahead with your forces. Unfortunately you’ll need to take a winding route to the second oases. 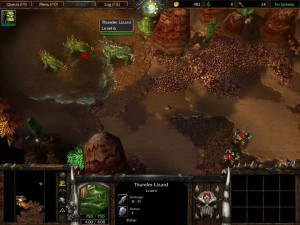 To the west are Centaur Marauders and Lightning Lizards. If you have the units take on the Lizards for the Claws of Attack +3, otherwise just deal with the Centaurs and move on.

You will be attacked from behind. If you need use a Healing Ward on the caravan.

Wind your way around to the second oases. Half way there you’ll come across a Goblin Merchant and some Orc Raiders will join your group.

You’ll need the Raiders to cast ensnare on the Harpies just up ahead. The Harpy Queen is tough to deal with but she does drop the Totem of Might. Once you’ve dealt with the Harpies proceed to the second oases and heal up.

Three Catapults will join you at the second oases and you should have a very strong attack force by now. The third oases lies directly to the west. Use the Catapults to take down the Marauder Towers from a distance to keep your units safe. 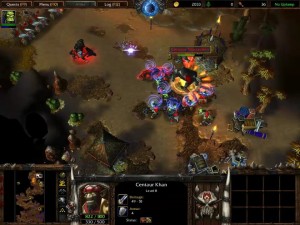 Just to the north is Centaur Khan. You’ll need all of your forces to take him down. He’s a level 8 hero who resurrects himself if he has the mana so you’ll probably have to kill him twice.

Khan drops the Pendant of Energy to make it worth your while.

Just a short trek through the canyon to the west will take you to the third oases.

Watch the cut-scene and continue on to the third chapter, Cry of the Warsong.