You enter into Stonetalon to find the tunnels veer off in different directions. Thrall and Cairne take a different path. You must sneak along with both of them to find the Oracle. No base building, just exploring and combat for this mission.

The Oracle – Bring Thrall to the Oracle.

Too many to mention! This place is littered with loot. I’ll point out a few in the walkthrough below. Just break all of the crates and kill all of the creeps along the way to find them all. 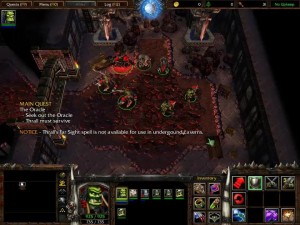 You start with Thrall and a small group of Orcs with the quest to find the Oracle. Break the gate to the west. Kill the Skeleton Warriors and break all of the crates in this room for a Scroll of Healing and Potion of Mana.

Head south and then east. You can use Thrall’s Spirit Wolves to scout out and attack the enemy first before engaging with your more valuable units.

To the east you’ll come to an intersection with paths to the south and north. Follow the path north first to find the Mantle of Intelligence +3. Then head south to kill the Fallen Priests.

Break the gate to the south and send the Spirit Wolves around to kill the Sludge Monstrosity which drops a Ring of Regeneration.

Head back to the room with the Fallen Priests and then head east. Break the crates along the corridor. One of them has a Wraith that drops a Scroll of Healing. Another drops a Potion of Greater Mana.

Once again the paths diverge. There is a gate to the east and a corridor to the north.

Through the gate to the east is a Fire Revenant.You’ll find a Tome of Agility and Scroll of Animate Dead in the crates. 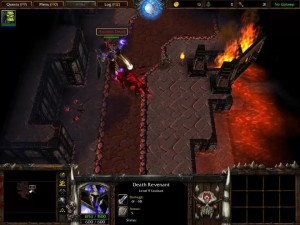 A Death Revenant lies to the north and these units are tough to take out.

Healing and Mana potions are in the crates behind the Revenant.

Continue east over the bridge and take out another Death Revenant. Once again use Wolves to weaken it until you can battle it with your main force.

Just past the Revenant is a Skeleton Lord with Skeleton Warriors.

The gate to the south leads to a Salamander which guards the Blood Key. Head through the gate to the north past the throne for the Crown of Kings. 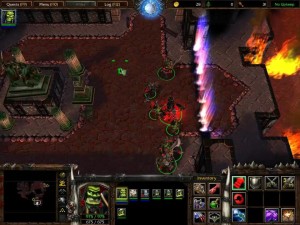 Continue through the Waygate and to the next intersection. The way south is blocked and you’ll need the Heart of Aszune to get pas the strange magical barrier to the east.

Head north instead and try to kill the Humans before they arm themselves.

To the east are three cells. A Kobold will break out of the first. Some fellow Orcs are held captive in the second and a Salamder Lord is in the last. He drops a Sobi Mask.

Follow the path east and then north to find some more captive Orcs. Further north you’ll come across Harpies battling a Red Dragon. The Dragon was holding on to the Heart of Aszune!

Take the Heart and then go through the Waygate in the next room to the north for a short-cut back to the Princess. Give her the Heart and the barrier to the east will be dissolved. It’s up to Cairne now to find the Gemstone needed to cross the bridge. 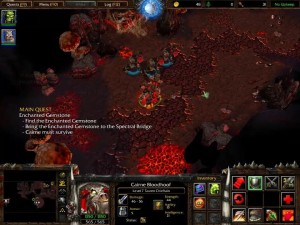 Cairne must find the Gemstone and bring it back to the Spectral Bridge.

To the north is a Stone Token but you can’t get to it because the rocks are in the way. Attack the rocks directly and a Granite Golem will awaken.

This fight is not really worth it. You will get a Rock Golem to fight for you for 180 seconds with the Stone Token but the Granite Golem is so tough you risk losing some of your Taurens.

Follow the path to the south and fight the Humans. One of them drops a Tome of Strength.

Now east for some Kobolds and the Talisman of Evasion.

As you continue south you’ll see a Hungry Hungry Lizard. Leave him alone and he’ll eat his way through the mushrooms to a secret area where you’ll find the Lion Horn of Stormwind. 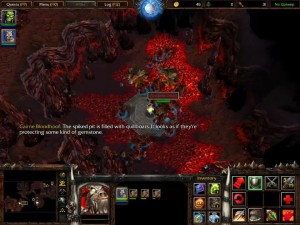 To the east is a large group of Quilboards protecting the Gemstone. This will be a really tough fight.

The gate in is locked. Head to the north and step on the pressure plate to open the gate. One of the Skeletons here drops Healing Wards as well.

To survive the fight with the Quilboars send in your Rock Golem ahead of your Taurens. Place down Healing Wards where you’ll be fighting and hope for the best.

Remember Cairne will reincarnate if he dies!

Take the Gemstone east and then north to Thrall’s group. Kill the Lizard along the way for the Belt of Giant Strength +6.

Kill the Seige Golems for a Ghost Key to open the gate to Thrall.

When you meet Thrall the bridge across to the Oracle will be revealed. Continue with the last Orc mission, By Demons Be Driven.