By Demons Be Driven

The real threat to Kalimdor and the world is the Burning Legion. The Orcs and Humans decide to work together to eliminate this threat. Grom has unfortunately been turned to the dark side so you must rescue him and bring him back to Jaina.

Hellscream – Capture Grom in the Soul Gem and bring him back to Jaina’s Ritual Circle.

1) Scroll of Protection on one of the Centaurs by the Fountain of Healing.

By Demons be Driven Walkthrough 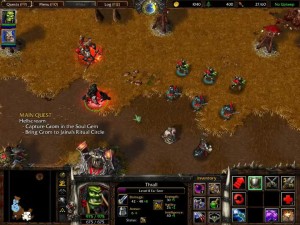 You start in a base just south east of the Human base. Remember you’re working together on this one. Grom is far to the north east. The picture on the left shows your starting locations.

As usual you’ll need Tower defenses along all of your borders. Place most of them to the north because this is where the strongest attacks will come from.

After about 8 minutes the Infernals will start to drop from the sky. There not as bad as they seem because they generally only attack in singles and they will also target the Human base. Your Watch Towers are usually enough to take them out.

To the east is a gold mine which is lightly defended as well as one in the center of the map. To the north east of the central gold mine is a Fountain of Healing which makes this a good area to set up a forward base.

The Fountain of Healing is guarded by Centaurs. Catch them while they’re sleeping to easily wipe them out. One of them drops a Scroll of Protection.

There is a Goblin Laboratory to the south east of the map. There are also small enemy outposts dotted around the map.

To the north, just below Grom’s base you’ll find some of the Horde locked in cages. Free them for a few extra units.

Battle with the Chaos Orcs

The Human forces will go out to attack Grom. Once they do follow along behind with your own army. The Humans will take the brunt of the force so you can focus on tearing down the buildings. 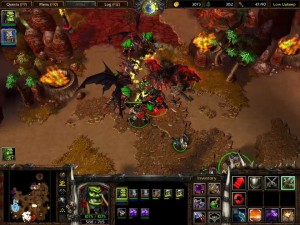 Your combined forces should be enough to sweep through the enemy base. As you venture north towards Grom you’ll be attacked by Doom Guards.

In total you’ll face 6 Doom Guards but hopefully only two at a time.

With my first attempt I tried to weaken Grom by attacking him rather than using the Soul Gem. This is a big mistake because Grom is too powerful to be harmed and I lost most of my forces.

Instead, click on the Soul Gem and target Grom with it to capture him. Run down to the south west of the map to Jaina’s Circle to complete this campaign.

Enjoy the ending cut scene and when you’re ready proceed to the first chapter of the Night Elf Campaign, Enemies at the Gate.