Tyrande’s Rescue – Use Illidan’s Naga forces to defeat the Red Undead base and free Tyrande.

Dam Trolls – Kill the Trolls and restore the river. 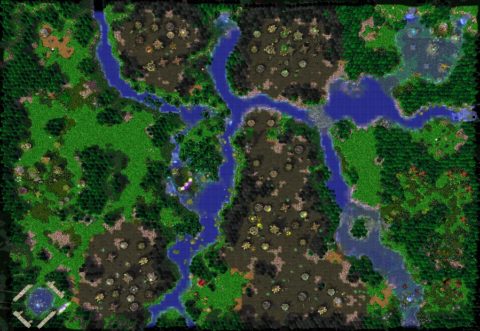 This mission is fun because you get to play the Naga forces and you have no real time limits. Tyrande will complain about being attacked but she can look after herself pretty well. The difficulty here is controlling two bases at the same time and they each have their separate resources.

Malfurion’s base is on the western side and he’ll be attacked from both the north and south. You’ll want to bolster those entrances with Ancient Protectors and the best units you have. Your Naga base is in the north east and this is where you’ll gather your forces to take out the Undead base.

The Naga don’t have any upgrades but their forces are still pretty tough and Illidan will get some special items that make him almost invincible. All Naga units can swim in deep water. Here are the main fighting units.

Myrmidon – A tough melee unit with 1080 HP that is good on the front lines and has the Ensnare ability to trap flying creatures.

Naga Siren – A ranged unit that can infect enemy units and spawn minions. They can also cast Frost Armor for +3 protection.

Dragon Turtle – A fairly tough seige unit that will do triple damage to buildings. A small group of these can take down most buildings in mere seconds. They can also Devour enemy units which takes them out of the battle and stops them from fighting back.

Dam Trolls – Protect your Naga base by putting Tidal Guardians all around it. When you head out into the river a cut-scene will play showing the Troll Chieftan. He’s nothing to sneeze at and has 2,500 HP. Once you clear up the dams you’ll have a clearer path to the red Undead base.

Head down to the south and take down the Chieftan. You’ll need Illidan, a few Myrmidons and a few other units as backup to take him down. He’ll drop the Mask of Death which makes Illidan recover 50% of the attack damage he deals to others as HP.

Tyrande’s Rescue – Follow the river all the way to the south for a Fountain of Health. Just to the west is a small green Undead base which you can take out with a few powerful units. Take over the mine here and build Spawning Grounds to recruit new units faster.

Build up two groups of forces. One with just Dragon Turtles and the other with Illidan, Myrmidons and Siren. Send in Illidan’s group to draw the fire of all the Undead Units. Then send in the Turtle to destroy all the structures and buildings.

If it doesn’t work in the first wave retreat to the fountain to heal up and try again. Setting up Tidal Guardians near to the Undead base helps as you can draw out their units and let the Tidal Guardians do their work before going in for the attack. Once all red Undead buildings have been destroyed Tyrande can be rescued.