As you enter the town Chump will get captured by someone in the grocery store. Speak with the nanny and she’ll complain about the hole in her roof. Walk up onto the roof and use the Umbrella on the hole in the roof. Walk back down and speak to the granny again. This time she’ll give you a Hot Water Bottle.

Climb back up the stairs to the roof and place the Hot Water Bottle on the large egg. A baby boucassier will hatch. Walk back down and enter the grocery store.

Give the Coin to the Grocer and then give him the Letter. The Grocer’s not too happy but at least you can grab the Egg of Boa-Boa and the Key. Use the Key on the moonstone lamp hanging on the left wall and Blount will get turned into a werewolf. Now talk to the Grocer again. Pick up the strand of Spaghetti and then click on the pot to open the lid and let Chump free.

Jump on the sofa to reveal a spring and then pick up the cupboard on the top level. Blount will throw it to the ground. Climb up to the cornice and Blount will jump down, smashing the cupboard. Look in the opening of of the cupboard to find a Hammer.

Jump on the spring and Blount will leap up to the ledge with the creature head (Gidouille). Use the Hammer on the Gidouille to break off part of its horn. Drop down and pick up the Horn.

Use the Hammer on the Grocer and he’ll drop the coin. Pick up the Coin and leave the store. Blount will return to normal.

After reading the advice for how to use the magic lab you’ll have two hands to control. A Left Hand and a Right Hand. The Left Hand is used for operating mechanism and the Right Hand is used for picking things up. You’ll eventually need to make three potions. The first is the Growthixir. Your inventory items will be scattered around the lab.

Now that you know it works make the Growthixir again, following the same formula as before. This time pick it up and pour it into one of the bottles on the shelf. Leave the Alchemist’s lab.

Use the Growthixir on the bud just outside the house with the lady. The snake is called Fulbert. Switch to him and climb the stem of the tree. Fulbert will scare the lady and she’ll drop her letter. Switch to Blount and pick up the Love Letter.

Switch to Fulbert and climb the stem once more. This time the lady will drop a flower. Quickly switch to Blount and grab the Flower before it falls down the grate. Use the Love Letter on the mirror outside the ladies house. The first time Blount will realize there’s a secret message on it. Use the Love Letter again on the mirror to read the message.

Switch to Fulbert and climb the plant up to the roof.  Walk both Fulbert and Blount over to the gap between the two roofs. Use Fulbert and click across the gap to make him stretch across. Quickly switch to Blount and walk across Fulbert to the other side. 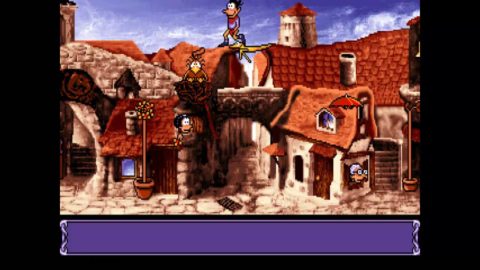 Pick up the Shoe Sole. Have Fulbert stretch across again and walk Blount back over the gap. Take both characters through the chimney and they’ll end up back down on the street level. Enter the Grocery Store.

Switch to Fulbert and have him click on the button on the table in the bottom left corner. The meat will fall down into a trapdoor. Switch to Blount and use the Hammer on the trapdoor and then pick up the Bone.

Place Fulbert just to the left of the night stand. Have Blount lift up the night stand and quickly switch to Fulbert to swipe away the soap. Switch to Blount and pick up the Soap.

Use the Hammer on the travel box at the back of the room. Look in the hole to find a Decoy. Leave the Grocery Store and go back to the Alchemist’s Lab.

Move Blount and Fulbert onto the Grannies house. Use the Speedixir on Blount to make him move much faster. Switch to Fulbert and have him make a bridge between the roofs. Quickly switch to Blount and have him use the Decoy on the bell. Quickly go back over Fulbert to the other side. Another Boucassier will arrive. Click on the Boucassier in the nest to draw its attention. It will fall in love and drop a feather. Quickly run Blount down to the bottom of the house and grab the Feather before it disappears. Head back into the lab.

Switch to the Left Hand and press the lever to turn on the tridose mixer. This will make Wingixir. Pick up the Wingixir with the Right Hand and put it into one of the bottles on the shelf to complete this section.

Next: Clouds, Foliander and Colossus’ Face