Walk into the stadium and you’ll be called to the front for your audition. The knight giving the test will ask you why you were late for the tournament. You can tell him:

1) I didn’t hear about the date change (Wisdom Path)

You need to find out as much as you can about the other contestants before taking the Chivalry Test.

Lastly talk to Manny and ask him about the two knights whose name you know (Acorn & Achaka). He’ll tell you a secret about Acorn. 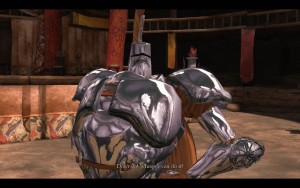 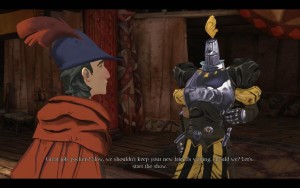 Return to Acorn and tell him you know the secret. Make sure you ask him what the squirrel’s name is. During the conversation he’ll tell you the middle knights name, Whisper.

Return to Whisper and tell him you know his name. Talk to Manny again and ask him about Whisper.

You’re now ready to take the Chivalry Test. Talk to the head knight and tell him you’re ready for the test. Here are the answers to the four questions.

2) The knight favored to win the competition: Achaka

After completing the audition you’ll be given the first real test which will be your entrance ticket into the tournament, the eye of a beast.

Continue on to the next part, Getting Prepared here.