Roll down the hill and try to avoid trees and rocks if you like but there’s really nothing you can do about it. Down the bottom of the hill read the sign telling you Daventry is just a few miles to the east.

Walk to the east (right). You’ll spot a column of knights heading to the tournament. The bridge is missing you can’t get over to them. Take the path through the forest to the left. Eventually you’ll come to a clearing with a beautiful mountain view.

Follow the path down the hill until you spot a toolbox in a nest. Walk over to the tree and push it to make the toolbox drop. Most of the items will fall into the river but you’ll still be able to grab the hatchet. 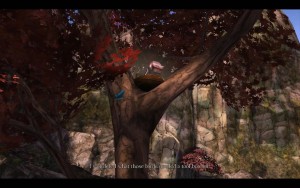 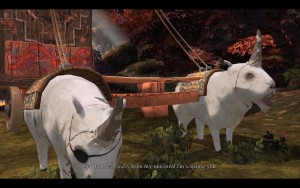 Jump across the river and continue following the tracks through the forest. Eventually you’ll come to a carriage with a strange little merchant man.

There are a couple of achievements you can get here. First use the hatchet on the unicorns repeatedly until they eat you. You’ll get the “Unicorn Snack Food” achievement. Secondly, follow the secret path behind the unicorns all the way to the end to receive the “A Secret Entrance” achievement.

Use the hatchet on the tree to knock it down. You can know walk across and continue your journey. Follow the path past the thornweeds until you come to the town gate. The gate is barred from the other side so you’ll have to climb up the rock on the right. 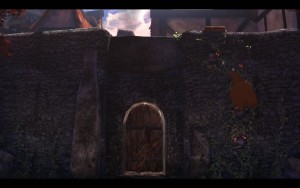 We’ll explore this town a little more later but for now we need to find a wheel for the merchant. You can enter three shops. Each of them has something that can be used for a wheel and each of them will put you a little further along one of the three paths.

2) The Bakers Bread – There is an enormous piece of bread in the baker’s shop. Big enough for a carriage wheel. Taking the baker’s bread and leaving a tip will progress you along the path of Compassion.

3) The Alchemists Table – The alchemists or magic shop contains a table top that can be used for a wheel. Grab the table top and leave a tip to progress along the path of Wisdom. 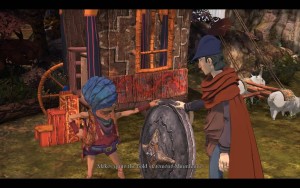 It doesn’t matter which of these three items you use as a wheel but you can only grab one of them. Take it back to the carriage and show it to the merchant.

He’ll try to sell you an entrance ticket to the tournament. It doesn’t matter what you do here as you’ll find out later on. If you don’t buy the ticket he’ll steal the gold from you later.

The merchant will drop you off just before the stadium. The bridge is missing here as well and none of the other knights can get across. Talk to the knights holding the rope. They’ll tell you that they never leave their post unless someone is in distress.

Walk down to the river, jump across the rocks and into the river. The knights will run down and rescue you. While they’re standing around push the tree and part of the beehive will drop down at their feet. They’ll run off to the river leaving you free to find a way across the chasm.

Walk back to the missing bridge and use your hatchet on the big tree. The big knight will pull you back and knock the tree over himself. Crossing first he waves to you and bumps the tree into the river. 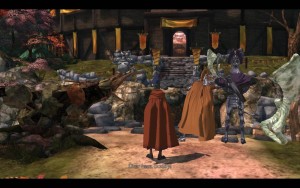 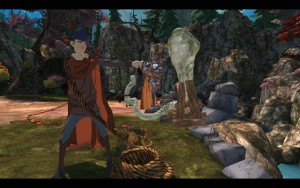 Grab the rope on the right side. The scary-looking knight will grab it from you and climb across. It’s your turn to shoot and arrow with the rope across the river. You’ll fail spectacularly. Never mind. Head back to the river and cross over the log.

After falling in the river use the hatchet on the log and then the rope on the raft. Have a chat with Manny and then climb up the rocks to the left.

Get ready for your first test, the Chivalry Test, in the next part.