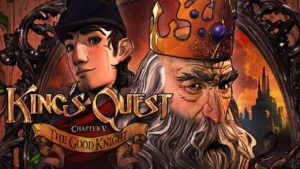 King Graham is back and this time recounts some of his last adventures in his old age. While lacking the vitality of youth Graham still has a spring in his step. The full walkthrough for King’s Quest Chapter 5: The Good Knight will be posted below shortly.

After the starting dialogue head out of the castle and cross the bridge. Continue through the garden, you can take a seat on one of the chairs if you want to give the old King Graham a rest.

When you get to the bridge choose ‘Horn‘ and blow on it. the Bridge Troll Olfie will come but he has a fire on his back! Take the path to the right to where the Bridge Trolls held their meetings in past chapters.

When you enter you’ll be able to pick what the place looks like now. Choose ‘Sandbox‘ and pick up the Bucket. Leave and go back in. This time pick ‘Commemorative Fountain‘. Use the Bucket on the water and then go back to the bridge. Use the Bucket of Water on the fire to put it out. 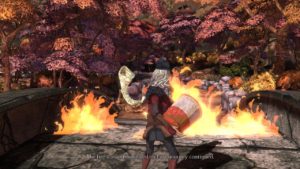 Continue over the bridge. King Graham will lose his memory and not know which way to go but there’s a giant forest fire up ahead. Walk towards the fire. You’ll need to rescue all of King Graham’s treasures one by one. The controls for this section of the game are reversed. Up is down and down is up, etc.

Walk up to each treasure on-by-one, the Shield, Treasure Chest and Trophy and bring them out of the fire. King Graham will pass out.

Piecing the Memory Back Together

Graham needs to find the right tune for the music box in order to open the door. On the items in this area you’ll see numbers on colored circles. The number reflects the order of notes and the color is the note that needs to be played. 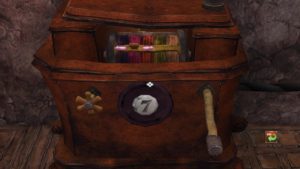 Shift the top bar so that the notch is over the right color. Then turn the wheel to the left to switch to the next note. Here’s the note order with colors.

It’s not really a maze but it is a puzzle. You’ll need to bring yourself and the two ice statues along the path to the end without letting any of the statues leave the path. Here’s the route you need to take. 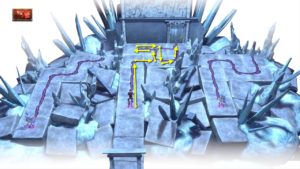 You’ll start this section in the town of Daventry. One of the shops should be open and I think which one it is depends on what path you have taken in previous chapters. Inside the shop you’ll find the Triumph Commemorative Plate 1/3. This is piece 1 of 3. You’ll find the other 2 pieces later.

When you leave the shop the town will be ablaze! Make your way to the castle. Don’t worry about getting lost there’s only one path you can take because of the fire. Jump across the fallen tree when you get to it and then back at the castle Manny will trick you once again.

After the dialogue Manny will throw you one of the Back Gate Keys. This is the first of four keys that you need to open the north gate out of town. Now it’s time for some open exploration, just like in Chapter 1. You’ll be able to explore most of the countryside around Daventry.

I won’t give you exact directions to each location as you’ll be able to find everything with a little bit of exploration.

Go to the west of the Pumpkin Patch and pick up the Fruit Picker. 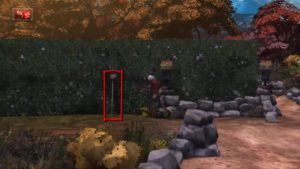 Walk down the path that leads to the Stadium and pick up the Triumph Commemorative Plate 3/3 from the bush. 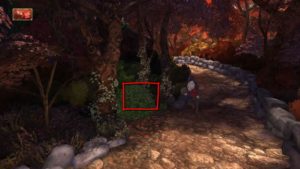 Look through the bushes near to the entrance to the cave and you’ll spot the third and final Puzzle Piece. 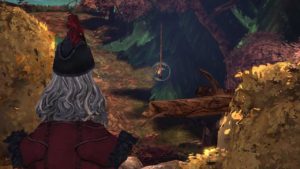 Enter the cave and walk all the way through it to the other side. Continue through the forest until you come to the Triumph Commemorative Plate 2/3. When you’re underneath it use the Fruit Picker to grab it. 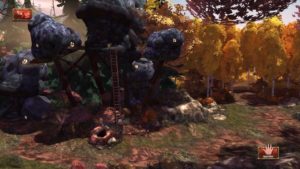 Now head to the area where there used to be a picnic table overlooking the castle. Now there’s a pedestal where you can place your 3 Triumph Commemorative Plates. Turn them so they fit into each other’s outline. A puzzle code will open up. Look at the letters that the plates are pointing to. R I P. Enter this into the puzzle box to open a secret compartment with the third Back Gate Key. 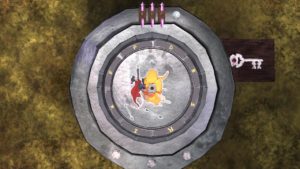 Run to the stadium where Graham has set up a set of puzzles. Forget about the Chest for now just grab the Candle and the the first clue. This is the first clue to a treasure hunt.

Walk through the cave and half way through you’ll notice a dark hole. Use the Candle in the dark hole to reveal the second clue and pick up a Shovel.

Head outside and drop down the hole in the ground where there used to be a trap. You’ll see an X marked in the sand. Use the Shovel on the X to reveal the third clue and to pick up a Knife.

Walk into the pumpkin patch and use the Knife. This will reveal the last clue and you’ll find a Fishing Rod with Fly.

Run back to where the frogs are located. You’ll need to travel through some white areas that Graham can’t remember but just keep going. This is where you consoled Whisper in a past episode when he lost the race.

Walk out onto the small jetty and use the Fishing Rod with Fly on the frog. You’ll catch the frog and find a number on its back, the number 8.

Run back to the stadium and now it’s time to open the chest. You’ll see a poster with four animals. Each animal represents a number and the numbers are the code to open the lock. Here’s the numbers and how to find them.

Pink Rabbits (7) – Simply add up the number of rabbits that you can see. 6 Fluffy pink rabbits and one on the board makes 7.

Squirrel (2) – Look at the three different paintings. In each of them is a white marking. Imagine the white markings together and you’ll see it’s actually the number 2.

Enter the code 7 8 2 9 into the lock on the chest to open it and take the last Back Gate Key. 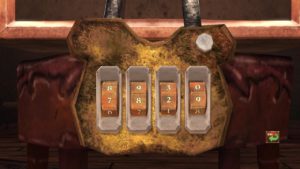 Head into town and use the four keys to unlock the back gate and continue your adventure.

Follow the path outside and lower the bucket down the well. Climb down the rope and continue through the cave until you meet Mordack.

After speaking with Mordack the bridge will be lowered. Walk across the bridge and go down into the crystal cavern. Graham will faint and end up in King’s Quest 1.

To get the full 8 points speak with Queen Valanice, look at the mirror and then speak with Prince Alexander and Princess Rosella. Walk to the east. Pick up the Locket and then go south. Look at the statue of Achaka and then pick up the Pearls. Look at the top left statue ‘Look Armer’ for another point. Walk south and search the bushes to the left for the last point and more useless treasure. Walk east across the bridge which will disappear.

Now you’re in King’s Quest 5. Play the xylophone on the right and watch the dancing scene. Enter through the large doors to the north to be transported to the town of Daventry. Speak to whoever you see, depending on what path you’ve chosen and then King Graham will wake up back in the Crystal Cavern. Graham will grab a piece of Germite Crystal.

On the floating island there are six tables each with a different puzzle. If you get the puzzle wrong you’ll drink the wrong goblet with the hypnotizing wine. Here are the solutions to all of the puzzles. Tables are ordered from the top right, going around clockwise. So the first table is table 4. 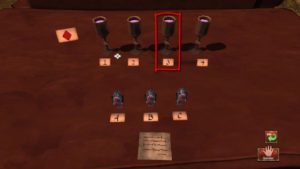 There are four goblets, two knights and one knave. The knights always tell the truth and the knave always lies. Unfortunately you don’t know which one is the knave. Click on all of the characters. Both B and C contradict A. As only one is a knave (and a liar) A must be lying and B and C telling the truth. Therefore the safe goblet is Goblet 3. 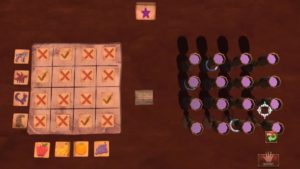 This is another logic puzzle. Go through the clues and find out which animal likes which kind of fruit. The answer is shown above. You want to drink all of the goblets that represent the ticks. Goblet 2 on the first row, Goblet 1 on the second row, Goblet 4 on the third row and Goblet 3 on the last row. 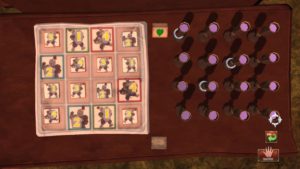 The numbers 1, 2, 3 and 4 must be on each row and column without repeating themselves. Drink all the goblets that correspond to the positions of each number 3. Goblet 1 on the first row, Goblet 3 on the second row, Goblet 2 on the third row and Goblet 4 on the last row. 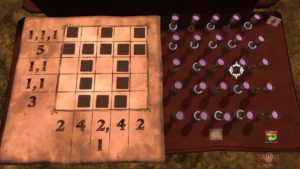 The instructions for this puzzle may seem a little unclear at first but once you understand what you need to do it’s quite easy. The numbers represent how many black squares you need to fill in for each row and column. A comma means there is at least a one box gap between the black squares. 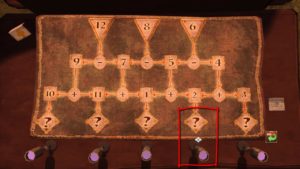 Simple addition and subtraction. Start from one of the top numbers and add and subscribe until you find the path that leads to the answer being 3. Answer is the fourth goblet from the left. 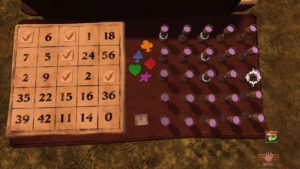 For the last puzzle you’ll need to think outside the box. The clue doesn’t seem to help much but think what it is you’ve just ‘left behind’. The Goblets! Go back and count how many goblets are remaining on each table. Mark off those numbers on the board. Table 1 is 1o goblets, Table 2 is 4, Table 4 is 3 goblets, Table 5 is 12 and Table 6 is 12 goblets.

Tick the number of goblets for each table off on the board. These are the Goblets you need to drink.

With one final test Manny will get you to select a Goblet. I chose the left one but I’m not sure it matters. When Manny tries to pour the poisoned drink over the castle put your hands in the way to save it.

For the final section of the game you’ll control Gwendolyn. Open the door and walk down the hallway. The carpets hanging on the wall represent some of the choices you have made throughout the game. When you get to King Graham’s room there is a note on the end of the bed. Read the note, extinguish the candle flame, look at the table on the left and finally sit on the chair next to King’ Graham’s bed.

That’s the end of King’s Quest! I hope you have enjoyed this complete walkthrough of all chapters of the series. Stay tuned for more King’s Quest walkthroughs.