When you enter the Amazon Arcade Scarlet wants to talk to you. You’ll need to win seven prizes for her. To her left is Pump It Up! Just put your tentacles on the pump and lift it up and down to win your first prize. Grab the prize from the chute and give it to Scarlet.

To her left is Mighty. Grab hold of the lever and pull with all of your might. The trick is to switch over to legs mode and walk away from the game while still holding onto the lever.

The Fish Toss game is an easy one as you can just climb over the barrier and knock them down with your body. There is also a tie on the wall on the right hand side of this game but you can’t get to it from here.

Climb into the Cayman Jaw Claw. Under one of the toys is the Green Stripey Tie. Pick up one of the prizes before you get out and give it to Scarlet.

Reel the Eels also shouldn’t be too difficult. Just lift up and down the hammer to hit the eels. You need to hit four of them before the timer runs out to win a prize. To get the tie next to the Fish Toss game you need to climb on the Reel the Eels game, then over the Fish Toss sign. Yes it is a very thin space! Once you are over the sign you can grab the Fish Pattern Tie. 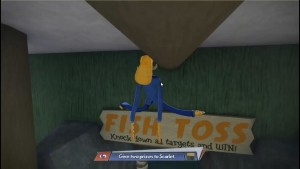 Put your tentacle through the table slot and press the red Go button to play the Chop Blocker. Swish your tentacle from left to right to stop the little circular saws from hitting the bottom of the table. It may take a few attempts to win this game.

Have a go at Amazon Air Hockey until you beat Matt at the other side of the table. It shouldn’t be too difficult.

Just a few more games to go. To win Fruit Blaster just move your turtle around randomly as fast as possible to hit all of the apples. 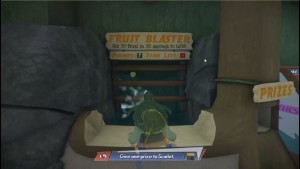 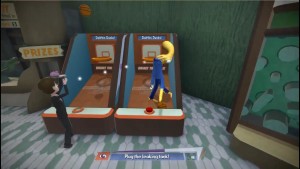 To win at Dolphin Dunks stand on the game, grab one ball and put it in the hoop and pull it out again repeatedly. You don’t actually need to throw the ball

Put the balls in the top of the Drip Dropper until one falls down the center. After winning all ten games you’ll be given the Heart Pattern Tie as your prize. 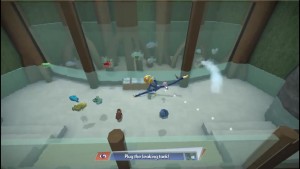 Uh oh! There’s a leak in the aquarium! Plug the holes with the toys as fast as you can then head out of the Amazon Arcade.

If you haven’t completed the World of Kelp or Deep Dark Sea go and do them now. Otherwise continue with Sea Legs.