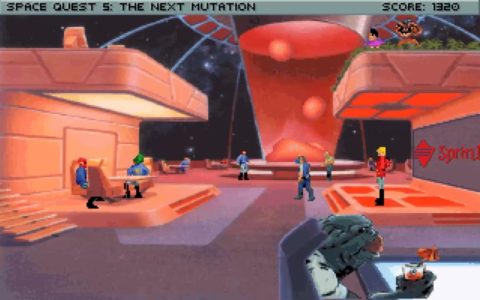 After teleporting down to The Spacebar (#69869), sit at the desk with Flo and Droole. A man will approach and give you a packet of Space Monkeys and a Business Card. Quirk will arrive next and challenge you to a game of Battle Cruiser. He’s very bad at it so it shouldn’t be too difficult to win. The more ships you have remaining at the end of the game the more points you will score. To finish the game with the maximum number of points you’ll need to beat Quirk without losing any of your ships.

After the match Cliffy will get into a fight and thrown into a cell. Sit down with Flo and Droole to figure out a plan.

Use the Space Monkeys in the glass of alcohol. Walk to the east and after the guards stop talking they’ll run off to find out what’s going on. Use the console to bring down the force field. Look at Cliffy’s cell on the left and use Spike on the bars to spew acid on them.

Once Cliffy is free you’ll head back to main area and teleport over to the Eureka. Put Spike back in his container and go to the bridge. You’ll receive a message to go to Klorox II (#90210). Lay in a course, go to lite speed, regular speed when you get close and finally go into standard orbit.

WD40 is now in working order so press the orange button on the armrest and ask her to scan the planet. Command Flo to hail the planet and the ship. There’s no answer from the planet so go to the engineering room and beam down to the planet.