After being taken away by a wyvern the three heroes are dropped off in the middle of a desert. Head across to the right and jump on the trampoline when you get to it and over to the statue. On the other side you’ll  find the first checkpoint.

Keep heading to the right and you’ll run into your first sandworm. Jump up the rock ledges to the top. To get across the cactus have Zoya shoot a gravity field around it and then place a plank over the top of it. 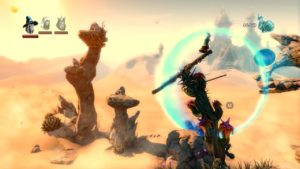 On the other side you’ll find the second checkpoint. Jump across the rock ledges again. If you drop down to the sand underneath you’ll be attacked by two sandworms at once. 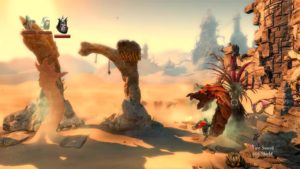 Head into the building and use Pontius’ shield to protect him from the light ray and head to the other side of the room next to the closed door. 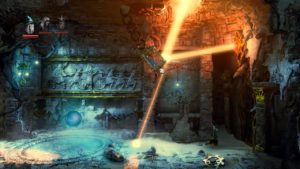 Use Amadeus to move the glass case into the line of the ray to reflect it back to the red button. Once this heats up the doors will open for a short time.  Run through the door before it closes.

On the other side of the door a boulder will fall from the roof so be careful. Follow along behind it and swing across to the third checkpoint. Push the rock and drop down with it to the cavern below.

Take out the goblin mummies and use Amadeus to pull out the coffin in the left wall. Head to the left and break the wood to release the experience potions. 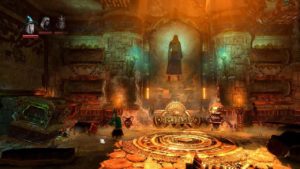 Head back out to the right and pull down the platform with the experience potion on it. This will open the door to the right. Put a box on it to hold it down so you can go through the door.

Use the mirror to center the beam of light onto the red button on the right wall. This will lift up the three platforms for a moment. Giving you just enough time to jump up them and over to the right. 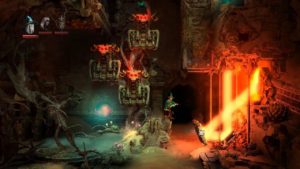 Pushing the button on the right wall here opens the strange gate to the left. You need to use the mirror to lift up the flappy platforms, push the button and quickly jump across to the left to make it through the gate. Putting a box on the pillar will drop it down, making it easier to jump across.

Past the gate you’ll find the fourth checkpoint. Jump up twice to the right and pull the skull on a chain to open the door to the left for more experience points.

Overhead is a wooden circular cog. Use Zoya to grapple up to it and swing up to land on top of it. This may take  few tries before you get it right.

Up the top there is a chest to the left but a headless statue bars your path to it. Take the head from the pedestal on the right and place it on the statue in front of the chest. Break the wood above the pedestal to drop the experience bottle onto it and weigh it down. This will prevent the fire from igniting in the center. Grab the Secret Chest with the Collectible Painting first and then the experience bottle. 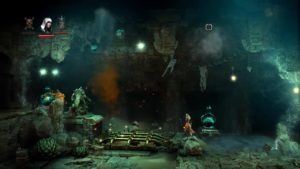 Drop back down and go to the right. Under each of the three statues is a pressure plate. The statues will chop with their axes when the plate is activated. Place two boxes on the side of one of the plates so you can jump up to the large experience orb.

Continue to the right to be attacked by goblin mummies. Then use Amadeus to pull around the wooden logs and move the circle in the wall and lift up the stone block. Once it’s been lifted up as high as it can go run through to the right before it closes in on top of you to the outside.

As you continue to the right two sandworms will attack. Take them out and swing up to the fifth checkpoint. Use a gravity field on the cactus and then pull it down with a plank on top of it. You can now jump across to the other side. 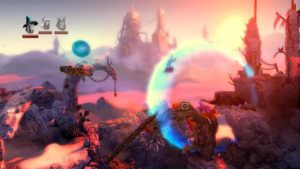 When you get to the giant scorpion move close enough to it to draw it out. Stand on the wooden platform and jump up when the scorpion strikes. It’s tail will get stuck and then you can jump over it. 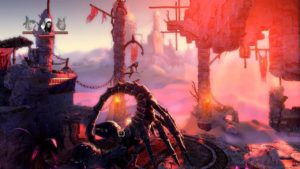 Drop down to a room with a light beam and mirrors. 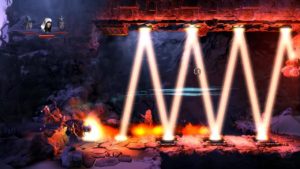 Pull the wooden part of the top section of mirrors down and place a box above it. This will clear the room of light beams. Put a box in front of the cannon and walk across to the other side.

Mummies will attack from the right. To get to the experience potions in the cage shine a beam of light at the red button to the right of it.

Walk to the right to find the sixth checkpoint. Drop down to the floor to activate a large pressure plate which starts a rock closing to the left. Jump back up and then over the rock, under the swinging spike, to the other side.

Take out the goblin mummy, break the rocks around the fire cannon, move it to one side and pull the lever. This will star rock columns moving back where you came from but don’t go there yet. There’s a secret to grab first.

Make a plank on the other side of the rock pillars and press the unseen button on the rock wall shown in the picture below to lift up the pillars. 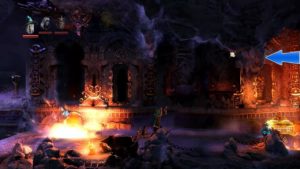 Open the Secret Chest to find the Collectible Poem. Then head back the way you came to the moving pillars.

Make your way up the pillars and jump to the right for the seventh checkpoint. Inside you’ll be attacked by 6 or 7 goblin mummies.

You’re almost at the end of the level but this is a tricky puzzle to complete. Move the mirror to the button to turn on the light beam and deflect it to the right. Pontius should have his shield up to deflect the beam up to the red button. 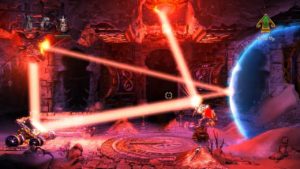 Head out the door to the right and into the desert to end the level.

Next Level: Belly of the Beast (Level 3)