The Goblin Machine is ready for action and its first victims are the three heroes. In order to defeat this machination you’ll need to explode all six of the weapons. It has no health bar but a symbol to the top right which shows you the weapons still remaining. 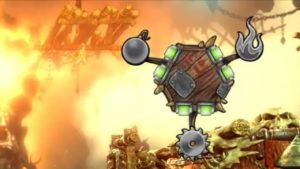 There is a checkpoint in the top center if any of your heroes die. It’s easiest to use Zoya to shoot behind the weapons at the appropriate time with a fire arrow to ignite the exploding barrel inside.

Once the weapons have been destroyed the goblin will appear from the top firing a cannon. Jump on top of the machine and take him down. 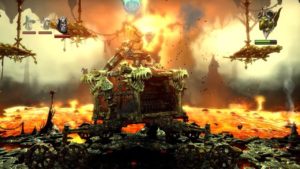 From this position he won’t be able to shoot you with his cannon. Once he’s dead you’ve completed the main section of this game. Well done!

If you found all the Secret Map Pieces along the way you’ll also have access to the bonus level.