There are two goblins to the right of the first checkpoint. One of them has a cannon and he’s quite tough to take down.

Head past the sign to the second checkpoint. Break the rock wall and head up the slope. Jump over the gap with spikes below and watch out for the fire-breathing wyvern.

Once he’s dealt with drop down to the right to the small stone platform. Lift up the stone on the chain to the right and break the rock wall above. The wind that comes here will lift you up every few seconds. Drop down with Zoya just before it comes to shoot the rock wall to the right. Then float across to the secret area. 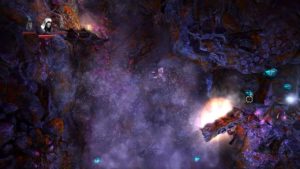 There’s no chest here unfortunately, just a few experience orbs. Float back up to the top and swing across to the right to the third checkpoint.

Use the stone on a chain to break the rock to the right and release the experience potions. There are more behind a wooden barrier to the top left. Sail across to the right. 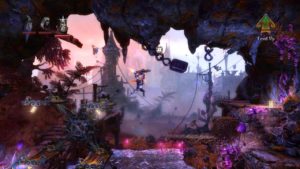 Drop down past the fourth checkpoint and pull the lever to the right. The door gets stuck and a rock gollom awakens. Take it down by shooting or hitting it in the chest. Once it’s down the gate will open and you can proceed. 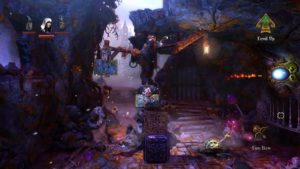 Jump up to the mushroom. There is a tower to the right with more experience potions inside.

Take out the goblin with the cannon on the other side of the chasm and jump across. Place a plank on the spikes above the fan and float across when the fan turns on. 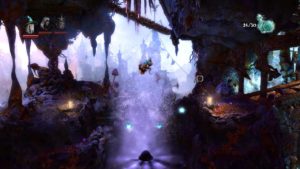 In the next section with ramps you can shoot a gravity field at the top of the upper ramp to stop the snowballs from rolling down. Then box up to grab the experience potions.

Drop down to the bottom and break the rock wall to the right. Head through to the sixth checkpoint. Create a gravity field and jump across the purple mushrooms to the top right. 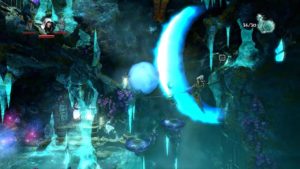 To the right is a darker area with small mushroom platforms. Jump across them to the right and then jump back again before the rock mouth closes on you. Fireflies will light the way to a chest in the darkness in the bottom left. 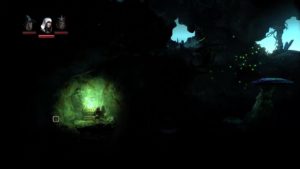 Jump over to the Secret Chest and open it for a Collectible Painting. Jump back to the mushrooms and out of the cave to the left. Jump across to the other side of the gap and follow where the snowballs are coming from to the top.

You can’t take the lift just yet as it’s attached by a rope. Sail or grapple underneath it to break the rocks, releasing the lift. You can now ride it across to the right. You’ll be attacked half way across by two wyverns so you might want to jump back to the left in order to be able to deal with them. 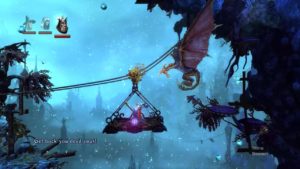 Jump across to the right to the eighth checkpoint. Use a gravity field to make it easier and to slow down the snowballs.

There are experience orbs under the river. You’ll need to throw a hammer from above to break the rocks to get to two of them.

Getting up over the other side of the river is difficult. To stop the flow of water onto the water-wheel place a plank and box on the bank above it. You can at least stand on the water-wheel now. Shoot the wooden barrier top left to drop down a barrel. You can stand on this in the water to make it easier.

Use a gravity field and place a plank or box above the water-wheel to get up the other side. 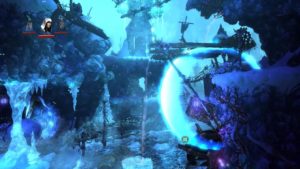 Place a plank on top of the gravity field. You can jump on top of it run across and jump to the remaining bridge on the left.

Break the rocks above the cart tracks to drop them down. Get into the cart and pull the lever to ride it across to the right to the ninth checkpoint.

The rail will break and you’ll slide down the side of the cliff. Jump over the chasm to the left and go inside the cave. Turn the fire to the left to melt the ice and reveal the chest. 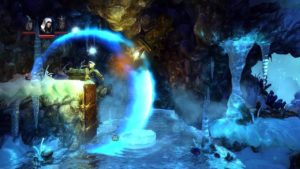 Shoot a gravity field at the side of the wall and then an ice raft in the water beneath. Jump on the ice raft and up to the Secret Chest for a Collectible Poem.

Go out of the cave and jump or swing across the chasm to the right. You’ll need a plank or gravity field to help you make it across. At the top you’ll be attacked by a wyvern and goblin. Once they’re dealt with continue to the right for the tenth checkpoint.

Jump on the wheel to wind up the fan. Once it’s wound up use the air stream to float you to the top. Head into the log cabin with the 11th checkpoint.

The flying machine is inside but it’s not yet ready. Jump on the pressure plate in front of the machine 6 or so times until it fires up. It still needs two propellers to work. One is on the floor to the right. Grab it and place it on one of the wings. 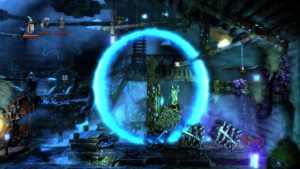 Grab the propeller and place it onto the other wing while standing on the pad in front of the machine to end the level.