Welcome to a walkthrough of the DLC for Trine 2 called Goblin Menace. The heroes return to their home town and are enjoying a drink at the local tavern when goblins attack and steal away Amadeus’ wife.

You begin in the tavern. Take out the goblins and head out the window to the top right. Drop down to hit the second checkpoint. 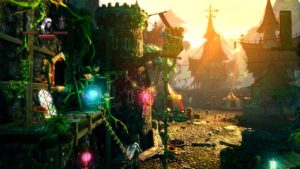 Pulling the lever lifts up the flappy platforms just above it. You need to time this with the two other platforms so you can get up the ledge to the right.

The lever at the top drops down the plank to the left so you can grab some more experience points. To the right is a catapult and the Trine will appear when you get close, directing you to the wall where goblins are attacking.

To get across the gap you can either pull the lever and ride a crate/box over to the other side or use Zoya to hook onto a box and swing across while it’s in the air. It’s pretty tricky to time but after a few goes you should be able to make it across. 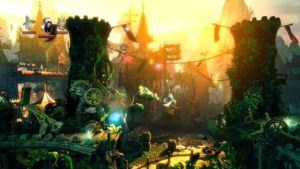 Slide down the roof of the house and open the Secret Chest with Collectible Poem on the ground below. Head to the right and watch the boar with explosive kegs smash the wall. Another boar will run at you through the wall. Use Zoya’s fire arrows to ignite them and blow up the boar before it gets too close.

A few more goblins will attack from the right including an archer goblin on some explosive kegs. Climb up the balance scales and over to the ledge where the water is falling down. On the roof above are more experience points. Once you have them place a box on the ledge underneath to have the water flow to the right. Use a plank to bring the water over to the bridge so you can put out the fire. 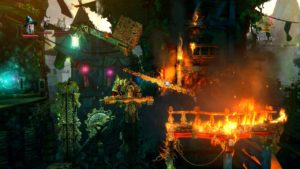 Climb back up and slide down the roof to the right for the next checkpoint. You’ll be immediately attacked by goblins including one shooting cannon balls at you. Climb up the balcony on the right and onto the roof above for a few extra experience points. When you’re down jump into the well. 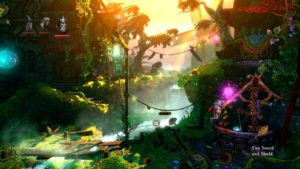 Underground there’s nothing in the water below here so get out of the water and slide down the mud to the right into another lake.

Go out of the lake to the right and make a plank above the water. It’ll drop down to the bottom where you can push it into a spinning cog to stop it spinning. You can now swim through to the left and down. Avoid being crushed by the spinning cogs and pull up into another little pool. With experience potions and a Secret Chest with the Collectible Painting. 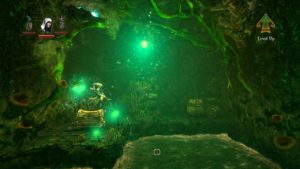 Go back the way you came to pipe with water spouting out of it. Throw a hammer to the top left to break a rock wall that will drop down experience potions.

To get across the next little lake use Zoya’s ice arrows to create a path of ice rafts across the lake. Over the other side is a bouncy mushroom and air stream. Shooting a fire arrow up to the right will release experience potions above.

Use the air stream to jump onto the spinning platform and then time your jump over to the left onto the flappy platform and onto solid rock. Keep jumping up until you’re out in the open. Watch out for the spikes on the ledge near the top.

When you get to the top you’ll see one of the goblin machines in the background and an explosive boar will run at you. 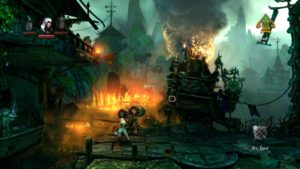 To the right you’ll find a water fountain. Stand on the arm to shift the flow of the fountain to the right. It’s still not far enough to put out the fire so use a plank to move the water over the fire. 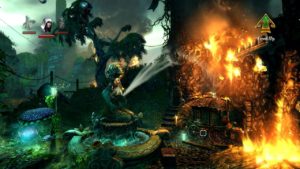 Head through the opening in the wall, plank across the spikes and take out the goblin shooting the cannon. Further along is another goblin shooting a canon in front of explosive kegs and a catapult. Destroy the kegs and then plank or box your way up the wall.

Drop down the other side of the wall to face the Goblin Boss! 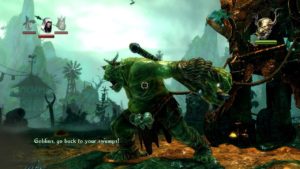 I found it easiest to take him down with ice arrows. However you do it once the big guy is dead shoot a fire arrow up on the right side of the tower to release the ramp. Jump up to the ramp and shoot the explosive keg in the center to blow up the tower and end the level.