Digging up the Dead

Take out the first Paladin guarding the tomb.

Establish a Base – Haunt a gold mine and build a Necropolis, Crypt, 3 Ziggurats and a Graveyard.

– There are three quest Paladins including Uther.

1) Gavinrad the Dire drops the Scroll of Healing.

2) The Granite Golem to the south drops the Pendant of Energy.

3) Bellador the Bright drops a Potion of Greater Healing.

5) Potion of Healing from a Sasquatch in the south.

7) A sheep near Uther drops the Goblin Night Scope.

8) A box near Uther has a Scroll of Protection.

Digging up the Dead Walkthrough 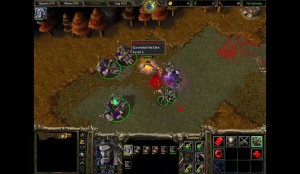 You start with a small force of Arthas, 3 Ghouls and 3 Meat Wagons. Head to the east and take out the towers with the Meat Wagons before pushing forward. It should be a pretty easy fight. The Paladin guarding the tomb is Gavinrad the Dire, a level 2 hero. Once you kill Gavinrad continue heading east to find the tomb.

After recovering the remains you will be teleported to a point further south on the map. Tichondrius will give you the challenge of killing the Paladins and recovering the Urn.

Build the required buildings for the “Establish a Base” quest. You’ll want more than three Ziggurats. Place them to the north and upgrade them to Spirit Towers. You’ll be attacked mainly from the north. 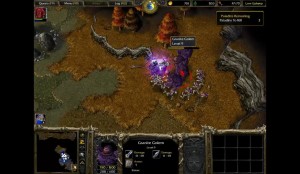 If you want to take on the Golems head to the south. Arthas and a full group of Ghouls should be enough to kill them. The Granite Golem is particularly tough but drops the Pendant of Energy.

When you have a decent sized force of 2 or 3 Meat Wagons, Arthas and a bunch of Ghouls you can head out to take down the Paladins. Having a second group of ghouls to send in first and take the brunt of the attack is usually a good idea.

To the north west of your base is the first Paladin, Ballador the Bright. Kill him and tear down the barracks before heading to the second Paladin further south. Bellador will drop a Potion of Greater Healing.

The second hero, Sage Truthbearer, is a level 5 Paladin. When defeated he’ll drop the Gloves of Haste.

Once you’ve dealt with the second Paladin head further west to find Uther. He’ll cast Divine Shield so wait to that to wear off before you begin an all-out attack. After defeating Uther pick up the Urn of King Terenas to complete the mission.

You can now continue on to the next chapter, Into the Realm Eternal.