Key of the Three Moons

After smashing through the Elfgate Sylvanas runs into the forrest. Arthas must find the special key to open the inner gate to Silvermoon.

1) One of the footmen to the west drops a Scroll of Mana.

Key of the Three Moons Walkthrough

You’ll begin the missions with a small force of Ghouls, Necromancers, Acolytes and a Meat Wagon. Three Crypt Fiends will also join you as the new unit for this chapter. The three altars will be shown on your mini-map. The bridge to the north has been taken away by Sylvanas so you’ll have to head to the altar to the east. 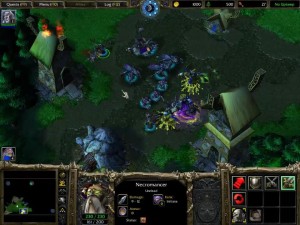 Crypt Fiends have the web ability and are a good counter to flying units. They don’t auto web so you’ll need to cast this manually. Move to the south-east and web the Hippogryph Riders so you can kill them.

Destroy the Elf houses here and set up your base. You’ll need Ziggurats for food and a Graveyard for upgrades. Upgrade your Necroplis to a Halls of the Dead so you can build the Slaughterhouse for more Meat Wagons.

Once you have the Graveyard upgrade your Ziggurats to Spirit Towers for defense.

To the west is a secret path through the trees with Footmen within. One of them drops a Scroll of Mana.

To the east you’ll find a Goblin Merchant with two Zeppelins. You’ll need these to transport your forces across the river to the east.

The Elves guarding the first Altar will defend it with their lives so you’ll need to transport a fairly sizable force over the river. I recommend focusing on taking out the Elven tower with Meat Wagons first. Even if it takes you a couple of waves of attacking that’s OK.

Destroy the towers around the Altar and pick up the first Moon Crystal. This will unfortunately take up one inventory space. 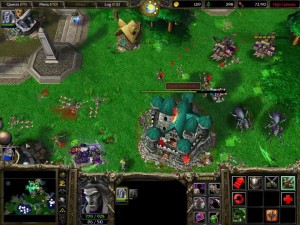 Just to the north of the first Altar is a Way Gate. This Way Gate will take you to a central island with yet another Way Gate. Elves guard these Way Gates so make sure you go in prepared.

Head through the second Way Gate which will take you right next to the second Altar. This Altar is defended by the green Elves.

After destroying the second Altar you’ll be able to pick up the second piece of the Moon Crystal.

The third Altar lies directly west of the second but to get there you’ll need to take the second Way Gate in the central island. Either that or Zeppelin your troops across the river.

The Elven defenses are about the same here as the other two so take it in waves if you need to. Sylvanas Windrunner is also here defending this Altar.

Make sure you bring Crypt Fiends along to all of the battles as the Elves use flying Hippogryphs which you’ll need to web to kill.

Destroy the Altar and pick up the Moon Crystal, the last part of the key.

Bring Arthas to the gate in the north-east to complete the mission. You can ignore the defenses and just run him onto the circled area if you want.

Once the gates are open continue on the the next chapter, The Fall of Silvermoon.