Crush and Destroy – Destroy the green Undead base.

Acquire a Gold Mine (Optional) – You’ll probably want at least one of these! 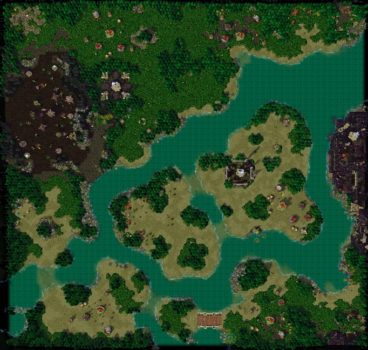 At the beginning of this mission all of your bases will be taken over by the Undead. All you’ll be left with is the central island Which will be attacked fairly often by the green Undead base to the west.

Don’t worry about your small surrounding bases for now, just start building a few Guard Towers in your central base to protect it from attacks.

Take your main force across the water to the south and clear out the purple Undead bases. They have few forces so it shouldn’t take you long. Secure the Gold Mines and build some defences on the western edge of your new base.

Now that you have some gold coming in start preparing another force to take over the northern side of the map. Once again it should be a fairly easy task to remove the orange Undead from the map. There is a Tiny Castle in the crates just near to the eastern mine.

Prepare a force to take out the green Undead base. You can attack from the north or the south. Set up some Towers near to their borders if you feel like you’ll need extra support. Their Wyvern building is on the south-eastern side of their base so you might want to take that out first.

Unfortunately you don’t have any seige units but with a bit of perserverance you should be able to wipe the green buildings off the map and complete the mission.

Next: Chapter 3: The Ruins of Dalaran