The Dungeons of Dalaran

The Ghosts of Dalaran (Optional) – The spirits of the Archmagi still haunt this place. Slay them to set them free.

The Jailor Kassan – Kill the jailor and all his guards.

Ring of the Archmagi

The Dungeons of Dalaran Walkthrough

This is another dungeon map where you control two heroes, Kael’thas and Lady Vashj. There are tons of items dotted around the map and secret runes that you’ll need to stand on for secrets. This map also has the entrance to the secret level called ‘The Crossing’. More on that later.

Lady Vashj will free Kael from his magical cell. The two of them, and any elves you find along the way should be more than a match for anything you’ll face on this map. Free the first Blood Elf Lieutenant in the cell next to kael.

There is a Stone Token in the river just to the east of your starting position. Only Vashj will be able to pick it up as it’s in deep water. Break the Magic Vault on the other side of the river for a Tome of Knowledge.

Break the door to the south of your starting location to see the four Spirits of the Archmagi. You’ll need to kill them to set them free. In this room you’ll find a Tome of Strength. Have two units step on the two green runes to open the Iron Gate to the east and kill the first Ghostly Archmagi. He’ll drop a Gem Fragment which will go together with the other fragments from the Archmagi to make the Ring of the Archmagi.

Make your way west and then south from your starting location to take out the spiders. The Monstrous Spider will drop the Medallion of Courage. Go back and then head to the very south to free the second Blood Elf Lieutenant. Free the elf next door and step on the two purple ruins to open the gate to the second Archmagi who will drop another part of the ring.

Go back to the east and head over the bridge. You’ll notice a yellow rune in the water just to the north of the bridge. Attack the Dalaran Experiments and place two units on the green runes for a Tome of Agility.

Continue north and have Lady Vashj swim to the yellow rune while another units stands on the yellow rune next to the mushrooms for a Tome of Intelligence. Continue around to the north and east. In a room with crates you’ll find the Boots of Speed.

In a small pool with a purple rune you’ll find the Claws of Attack +6 hidden from sight behind a statue. 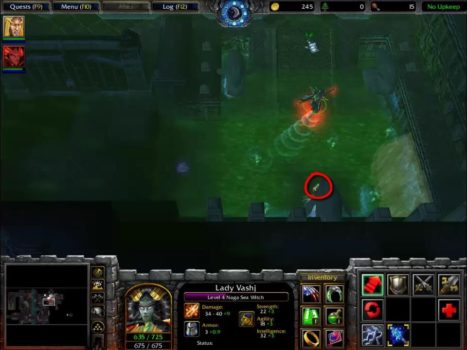 Step on the two purple runes to open the gate to the third Ghostly Archmagi and the third part of the Ring of the Archmagi. Continue to the south and free the third Blood Elf Lieutenant.

Further to the south will be a large room with a big battle. Let the duke it out and then clean up the remainders. There is a sparkly entrance to a cave on the eastern side of this room that leads to the second red rune. Step on both red runes to open the gate to the fourth and last Ghostly Archmagi and the last piece of the Ring of the Archmagi. 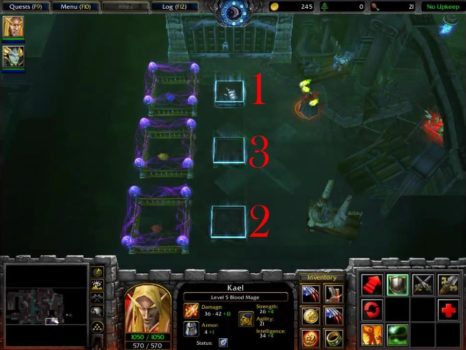 Step on the pressure plates in the orders shown above to open the gate to the north. They will sing “Baaa, Ram, Ewe” Go through and pick up the Secret Level Powerup.

Continue around to the south and east. Use Flame Strike on the mushrooms to reveal a light blue rune. Step on the other light blue rune as well to open a gate to an Arcanite Golem. Break the crates in this room to reveal a Shamanic Totem, Frost Wyrm Skull Shield and the Essence of Aszune.

Work your way around to the east and then north. Free the last Blood Elf Lieutenant and then kill the jailor and all the guards to complete this mission.

Next: Secret Level: The Crossing