Shadow Keys – Kill both the Master of Pain and the Mistress of Torment to gain access to Magtheridon’s throne room. 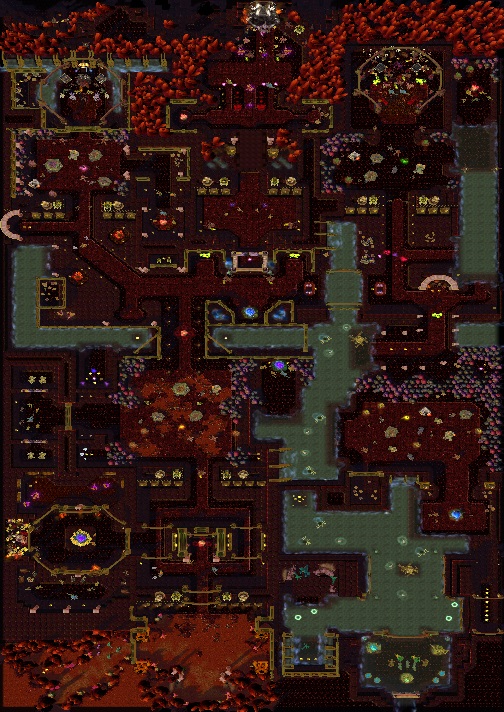 In the last chapter for the Curse of the Blood Elves campaign you control four heroes, Lady Vashj, Prince Kael’thas, Illidan and Akama, a Dreanei hero. You’ll need to first destroy the generators, which will take down the base defenses, so you can move in with your forces through each of the orc bases.

You’ll find coins scattered around the area. You can use the gold to replenish your forces if any of your units get killed.

First Generator – Move the Draenei to the north, past the first orc camp. In the hallway beyond you’ll spot another generator. Have the Draenei destroy this so that Illidan and Arthas can move to attack the first orc base.  Once it’s destroyed have a look around. You’ll find some orc siege weapons in the room to the west.

Second Generator – Continue moving your Draenie to the north west. On the eastern side of the next orc base is a corridor that leads to the second generator. Destroy the units around it and then the generator itself to clear the way for the other troops to enter the orc base.

Rest and replenish your troops and then head north to kill the Master of Pain. Bring your Draenie and Human troops back to the center of the map and have someone stand on the pressure pad to open up half of the bridge.

Go back and press the pressure plate to let the rest of your troops across. You can now use all of your troops to wipe out the last Orc base. Push northwards and kill the Mistress of Torment to complete this quest and open the way to the Throne room.

Magtheridon – Head back to the center of the map and destroy the last Orc base protecting the Throne Room. Rest your heroes and replenish any units then head forwards to take down Magtheridon. It’s not easy but should be possible with all three of your groups working together.

This is the final chapter for the Curse of the Blood Elves campaign. Next we’ll pick up the story of Arthas with the Legacy of the Damned.

Next: Legacy of the Damned Chapter 1: King Arthas