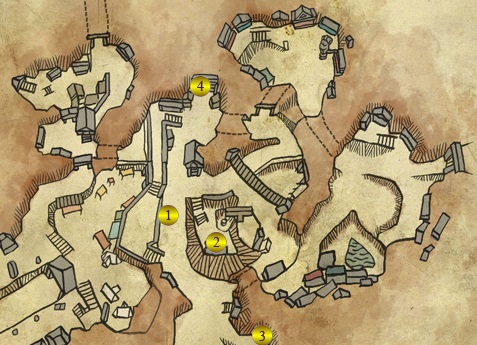 Once you complete Prelude to War: Aedirn this quest will be unlocked. Saskia has called a meeting with the Vergen nobles, Philippa, Iorveth and Geralt. Before going to the meeting Skalen will show you around the area.

You start in Vergen (#1) here and Skalen will show you into the Tavern (#2). Follow him up the stairs and he’ll show you your room. You’re now free to head out of the tavern and head to the meeting at the Town Hall (#3).

Philippa will talk about the blood curse and the fate of Vergen. Luckily the mist has stopped King Henselt’s army… for now, but it is expanding and so must be lifted.

Saskia invites Iorveth to the meeting, much to everyone’s dismay although considering he has experienced archers under his command they agree to let him join the fight against the Kaedwenians.

After Saskia proposes a toast she passes out. Someone poisoned the wine! Philippa will react first and quickly take Saskia to her House (#4). She request that you bring her an Immortelle herb, Royal Blood, a Rose of Remembrance and a Magical Crystal. From here you’ll be given new quests, A Matter of Life and Death, Hunting Magic, Royal Blood, The Eternal Battle and Where is Triss Merigold?