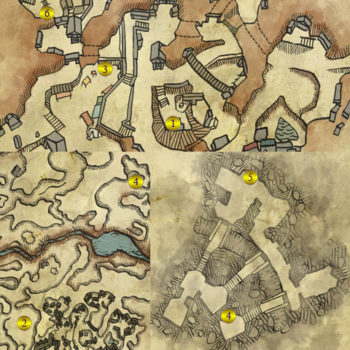 This quest can be completed once you’ve finished The War Council but must be finished before you finish Royal Blood otherwise you won’t a chance to do it.

Outside the Tavern (1) you’ll meet an elf called Ele’yas. He tells you about a succubus killing men in the Burned Village (2). If you decide to investigate make your way to the burned village at night time. You’ll encounter a few wraiths and Geralt will comment that he notices the smell of sulfur, which would indicate the presence of a succubus.

There’s nothing more to do here for now so visit Felicia Cori (3) and purchase the Surgical Tools from her. Next head into the Dwarven Catacombs (4) and look for the Victim’s Body (5). There should be some marks on the body to indicate what really happened to him. At first appearance it does look like a succubus killed him but examining the arms you see a piece of metal. With the surgical tools you’ll be able to extract the Metal Scrap. Check the back of the body also to find Dandelion’s Poetry Sketchbook.

Go back to the Tavern (1) and speak with Dandelion. He’s glad you found his love poems and as repayment you convince him to make a love song for the succubus. At night time meet Dandelion at the Burned Village (2). You’ll take control of Dandelion as he sings his song. The song should go like this:

If our bodies could a song compose,
My heart would enquire of your hands pale and fine.
If they’d grasp it gently, to hold like a rose,
Or treat is as a morsel upon which to dine.

The succubus won’t be able to resist the sound of Dandelions song and will come out to lure him into her lair. You can either call for Geralt or go with her through the trapdoor.

If Dandelion goes with the Succubus you’ll be back with Geralt. Run after them and enter the lair. Dandelion doesn’t appear to be too worried, in fact he seems quite pleased with himself. The succubus says she isn’t the murderer but that it’s Ele’yas who became jealous of her. You can either choose to fight her or to go and investigate.

Back with Ele’yas (1) he’ll defend himself so you’ll either need to side with him or go back to the lair. If you try to accuse him you won’t be able to do it without proof. Luckily you found a Metal Scrap on the victim’s body. Show it to Iorveth (6) who will confirm the metal came from Ele’yas’ blades.

Make your way back to the succubus for your reward, and to “rescue” Dandelion. Ele’yas will intercept you and try to kill you. Take him out and head down to the succubus lair. You can have sex with her if you want. Make sure to search the chest for a Rook Potion, Thyssen’s Armor and a few Orens.