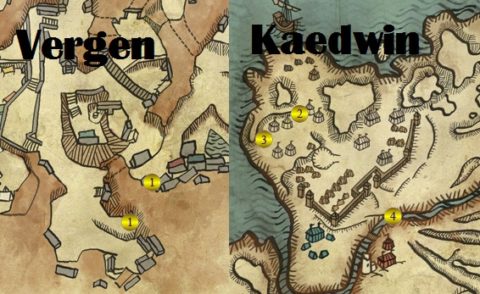 One of the ingredients for Saskia’s cure is Royal Blood and this can only be recieved from either Stannis or Henselt. This quest is recieved once The War Council is finished at Saskia’s House.

Make your way to the Town Hall (1) and search around for Stennis. He’s the only royalty available right now. King Henselt is across the other side of the mist. Ask Stennis for some blood. He will reject you but this also casts suspicion on Stennis.

Continue with the Where is Triss Merigold? quest and bring back the Bandana to Philippa. When you do you’ll hear shouting coming from outside. When you go to investigate you’ll hear that the locals think Stennis was responsible for poisoning Saskia. They want his head.

You’ll have a short amount of time to speak with the people milling around. It’s good to talk to Halldor Halldorson for the quest The Walls Have Ears and the Aedirnian Townsfolk for the quest Suspect Thorak. You also might want to speak to Iorveth, Dandelion, Zoltan, Johlan and Stennis. You’ll need to use Axii on Stannis’ guards to gain an audience with him.

Leave for a while and do some other quest and then come back to the Town Hall. You’ll need to decide whether to let the mob lynch him or to give him a fair trial. If you hand him over to the mob you can get some Royal Blood from his corpse which finishes this quest. If you ask for a fair trial he’ll be put into prison and out of reach.

You’re only other option is King Henselt. Follow along with the Where is Triss Merigold? quest until you cross over to the other side of the mist. Speak with Roche (2) and ask to help set up a private meeting with Henselt. Roche takes you to see him and will lure away some of the guards. Make your way to the stack of Barrels (3) and use the Aard sign on them to knock them over and distract the guards in front of Henselt’s tent.

Make your way around the back of the tent and then around to the front as the guards walk around. Enter the tent to meet Henselt. After the conversation Henselt will give you a vial of Royal Blood and then tell his soldiers to escort you out of the camp to the Drop-Off Point (4).