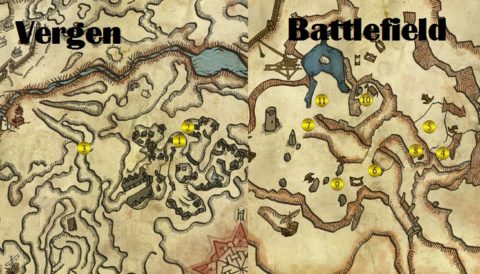 The Eternal Battle brings together Death Symbolized and Hatred Symbolized. Following along with those two quests will eventually lead to the opportunity to lift the cursed mist from the battlefield.

This quest is received from Philippa while having a conversation with her in front of Saskia’s House (1) after the quest The War Council. To find out more information about the curse and how to lift it visit Philippa at her House (2). You’ll need to find four artifacts, each symbolizing one of the aspects of war.

You’ll find the Standard of the Dun Banner by completing Death Symbolized and Vandergrift’s Sword by completing Hatred Symbolized. Once you have these two the Philippa will give you the artifacts for Courage and Faith.

Speak with Philippa again and tell her you’re ready to lift the curse. Make your way over to the Mist Entrance (3) and the ghosts of soldiers will come to you to play out their part in the battle.

The First Ghost (4) that you control will have the objective of capturing the enemy Standard (5). You can roll or use any of your Witcher abilities. You can only swing your sword and parry. Once you defeat the Draugir this ghost will have performed his duty.

The second ghost is a Messenger (6) to the commander. You’ll need to run the gauntlet while avoiding the hail of arrows. Move as fast as you can and hide behind each barricade as you make your way forwards to #7. The barricades will collapse after being hit by 2 hails of arrows so keep moving.

The Third Ghost (8) is the Visitor. Defeat the enemy soldiers and then you’ll be back with Geralt once more for a fight with the Draug (9).

The Draug is a massive magical beast that has a few different attacks, a charge, melee attack, meteor strike, rain of arrows and disintegrating swirl. Make sure you dodge out of way of his melee attack. You’ll know when the rain of arrows is coming because the Draug will call out “Archers!” before the arrows appear. Roll out of the way and find shelter until it’s over.

The meteor strike will cause a red circle on the ground before it hits. Make sure you’re out of the area of effect or you’ll suffer heavy damage. For the disintegrating swirl the Draug will deconstruct himself and swirl around like a tornado. Make sure you’re far enough away or behind shelter.

The best way to defeat the Draug is to wait for the charge attack. The Draug has a shield bar as well as a health bar. If you’re attacking from behind you’ll reduce his health directly. Run in behind him after he charges and start swinging. You should get in a few attacks before he has a chance to turn around. Dodge the other attacks and wait for the next charge to run in with your attacks again.

Eventually the Draug will fall and when he does you’ll automatically loot his body for the materials you need for the Draug Armor.

Once the Draug is defeated one final ghost will possess you. This time you need to quickly escape the battlefield as meteors start falling to the ground. Make your way to the exit and witness a final scene where Henselt sentences Sabrina to death for the destruction she caused.

Once this is all over Geralt will bring back another memory. This one is a memory of helping Letho. When you wake up you’ll be in Philippa’s House (2). Only one quest remains, Vergen Besieged.