Back to White Orchard

Missing in Action is a side quest in the Prologue and must be completed before completing the main quest Lilac and Gooseberries. You can pick up this quest by reading the Notice Board in the village, speaking with Dune Vildenvert in the ransacked village or by finding the missing brother, Bastien, on your own. 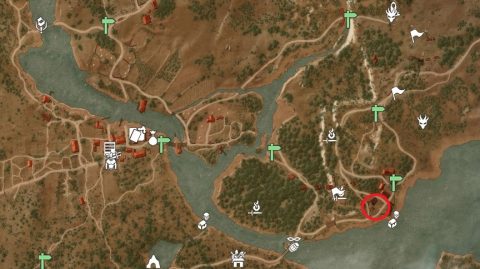 If you start this quest by reading the Notice Board you’ll have to find Dune. He can be found with his dog outside a hut in the ransacked village (circled above). When you talk to him he asks you to help him find his lost brother.

Either follow Dune to the battlefield or meet him there whenever you’re ready. He tells you to look for a Temerian Shield with flowers on it.

While searching the battlefield you’ll be attacked by Ghouls. If you have the ingredients you can craft some Necrophage Oil which when applied to a silver sword gives you 10% attack power against Ghouls.

Use your Witcher Senses to find the Temerian Shields. Once you get close to a burned corpse near the woods the dog, Hussar, will pick up the scent of the brother.

Follow the dog into an abandoned cabin and you’ll find Bastien with a wounded Niflgaardian soldier called Rhosyn. They’ve been helping each other survive. Dune doesn’t want to take the Nifgaardian in but his brother insists on helping him. You can convince Dune either way.

If you say it’s too risky then Rhosyn will die in the cabin. If you convince Dune to help Rhosyn then he can be found living with the family later.