Aviary Action is another aeroplane boss fight, this time against a giant bird called Wally Warbles. The location of this fight is to the north-west of Inkwell Isle 2 and is fought over 4 phases.

Wally Warbles is trapped in a birdhouse and will fire either eggs that explode or bullets from his hand. When he’s firing eggs stay at the far left side of the screen. The eggs will hit the left side and eggshells will explode away from the left towards the right. 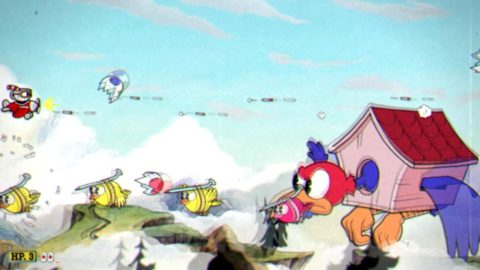 Wally Warbles will go a little crazy after the first phase and start firing feathers at you. There’s a pattern to the way they fly towards you and you can dodge them by just making little movements with your plane. 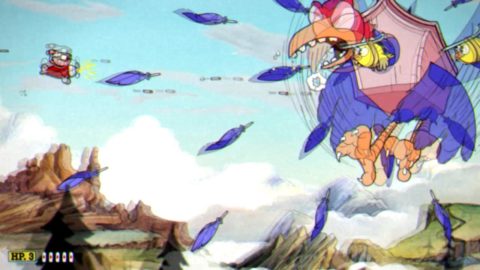 The little birds with nails will continue to fly towards you as well. After Wally has exhausted himself a few times and you’ve done enough damage Wally will transform into a baby version of himself.

This phase is actually quite tough as the flying spiked eggs will revolve around Wally, getting closer and further apart. They can be hard to predict and dodge. The eggs will also block your shots from hitting Wally. It’s a good time for a super special if you have it. 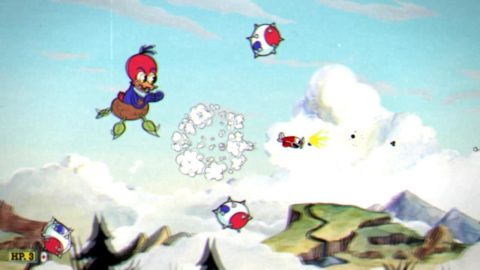 When Wally approaches it’s a good time to scoot over to the opposite corner of the screen. When he gets closer fly rings around him and move to the other side of the screen. Wally will also fire pink bullets at you which you can slap. Once you’ve done enough damage you’ll proceed to the next phase.

Phase 4: Wally on a Stretcher

Wally will be carried out on a stretcher by two medic birds and together they’ll fill up most of the bottom half of the screen. There are three attacks you need to watch out for.

Pills – The medic birds will shoot up pills into the air. Once they’re high enough they’ll split in half and fly off in opposite directions.

Junk – Wally will open his mouth and spew out junk. Some of the items are pink so you can parry them for extra cards.

Heart – Once in a while Wally’s heart will come out of his mouth and shoot bullets at you. 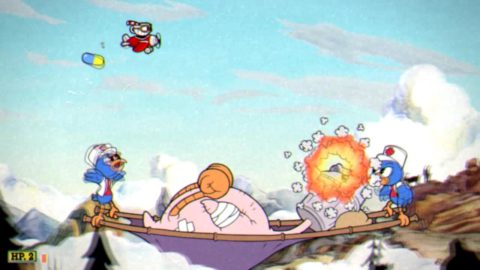 Switch over to your bombs to defeat this last phase of Wally Warbles. The super bombs work really well as well so try to have a few cards spare for this phase. Keep to the top and left side of the screen and continue dropping bombs. Duck under the pills, junk and bullets and just keep firing. It’s a fairly short phase so you won’t need to keep dodging for long.