After the intro Laverne, Hoagie and Bernard will be back in the mansion. You’ll take control of Bernard first of all.

First pick up the help-wanted sign half hanging out of the window to the left. While you’re here grab the flier as well from the flier rack. 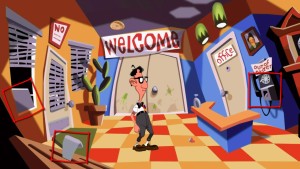 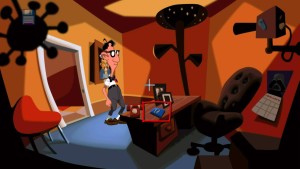 Go back out of the office. Head over to the right, open the grandfather clock and climb in. This will take you to Fred’s Secret Laboratory.

Watch the cut-scene with Hoagie, Laverne and Dr Fred. He’ll tell the others that he’s locked the tentacles in the laboratory because one of them tried to take over the world. Meanwhile, Bernard is setting them free!

Next we’ll venture back in time with Hoagie to find the inventor Red Edison (Part 2).