For the moment you’re still with Bernard in the present. Head to the right and on the wall you’ll see a To Do list. Pick up the paper. It contains the plans to make a super-battery. Dr. Fred will return and flush them to Hoagie through the Chron-O-John. 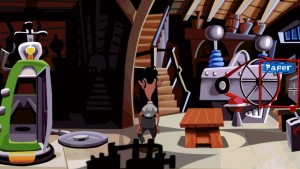 Switch over to Bernard and finish the conversation with Dr. Fred. He’ll tell you that you still need a diamond for the capsules and Laverne will need power in the future as well. Switch back to Hoagie.

Head to the left, past the kumquat tree and past the carriage. Open the door of the house and walk inside. The mummy at the front counter doesn’t have much to say. Walk to the right, open the grandfather clock and climb inside.

In the basement you’ll find Red Edison working away at some invention. Pick up the left-handed hammer next to Red. 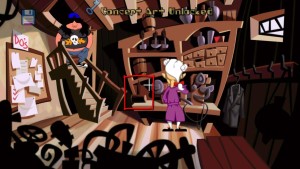 Speak with Red if you want to and then open your inventory and use patent application with Red Edison. He won’t be able to make the super battery just yet. He’ll need oil, vinegar and some gold.

In the next part we’ll look at finding all the components for the Super-Battery (Part 3).