Back to Disco Elysium

The harbor is closed off while the Union is on strike. You’ll need to get into the docks to speak with the Union boss, Evrart Claire. He knows where your gun is and can provide help with getting down the body if you’re having trouble. There are three ways into the harbor, either through Measurehead, by stealing a dockworker’s ID or jumping from the ledge above Cuno’s shack.

Getting into the Harbor

Getting Past Measurehead – Measurehead is a tough character to deal with and he won’t let you past without either fighting him or internalizing his views on race. If you choose not to fight him listen to all of his dialogue and then choose to research the Advanced Race Theory in the Thought Cabinet. Come back to Measurehead once that’s done and give him your opinion. After this he’ll let you through to the docks.

Through the Green Door – During the evening you’ll find a dockworker passed out near the front door of the Whirling-in-Rags. If you pass a check you’ll be able to steal his ID Card. this can be used to open the green door at the end of the walkway opposite Measurehead.

Shortcut from Cuno’s Shack – From the yard inspect the roofing material by the shack. It’s hiding an entrance to Cuno’s shed. Inside you’ll find some of Cuno’s belongings and a ladder leading up to the rooftops. From the rooftops you’ll need to jump over the railing to reach another area. This is where you can find your RCM Patrol Cloak. From here you can make your way around to the docks.

Speaking to the Union Boss

Follow the shipping containers along until you find Evrart Clair. He’ll insist that you sit in an uncomfortable chair which may cause one point of health damage so make sure you have at least two points before coming here. Your Morale also might take a hit throughout this conversation. 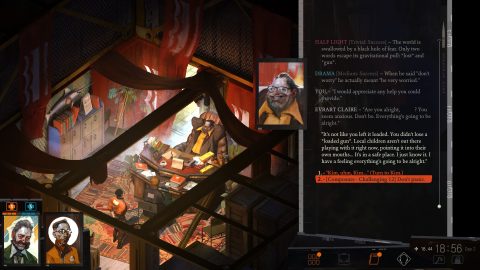 Evrart seems to know a lot but is unwilling to provide you with much information. He alludes to helping you find your gun but only if you work for him. He’ll give you two side quests, one of them is to open an apartment door and the other is to get two signatures.

If the body is still dangling from the tree you can ask Evrart to help you with this sitaution. He’ll tell Measurehead to help you out. This will automatically pass a few checks when dealing with Measurehead.

Finally Evrart will give you an ID Card so you can enter and leave the harbor whenever you want. You’ll need to come back here to speak to Evrart a few times throughout the game.