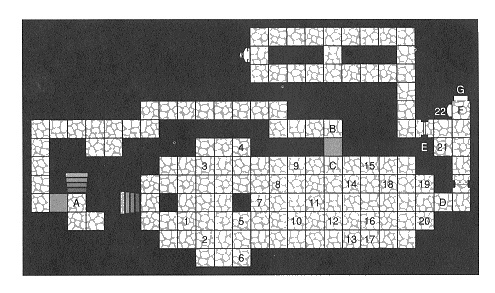 Lots of Coins and Gems. The Square Key is found at location 14 underneath some ashes which opens the door at D. You can use a coin at E to gain access to the Altar beyond. 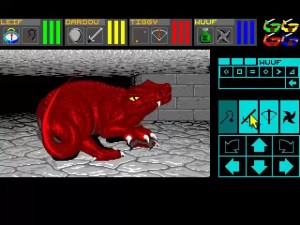 The best way to defeat the Red Dragon is to stick and move. He moves slowly so you shouldn’t have any trouble getting to the side or behind him.

Throw everything you’ve got at him and then move out of his way when he turns towards you. Expect to have to do about 2,000 points of damage before finally killing him.

Once you’ve killed him he’ll drop more Dragon Steak than you’ll ever need. Feed up your party and continue through the door D to find the Power Gem.

Getting The Power Gem 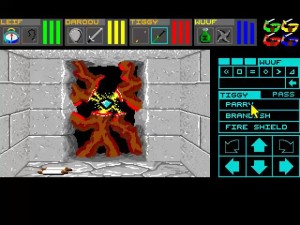 If you’ve read the scrolls along the way you’ll know that you can’t just pick up the Power Gem. You’ll need to cast a Zokathra Spell first. Pick up the spell from the floor and place it on the Gem. This will open up the barrier.

Once the barrier is open grab the Firestaff and click with it on the Power Gem to fuse the two together.

After having defeated the Red Dragon and fusing the Power Gem with the Firestaff you’re ready to take on Lord Chaos on Level 13!