The button next to the door is actually the light switch. Turn the lights off and have a look at the clock on the wall. You’ll see a secret time that points to 4:45. This is the code you used to unlock the cell door in the first part.

Open the door and go outside. You’ll notice two large crates stacked on top of each other. Walk around to the right side of the crates and push them to the left. Push them again to the left and they’ll end up under a magnet. 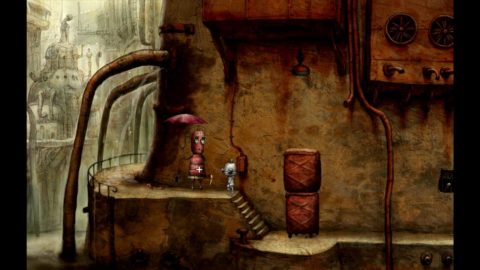 Walk down the stairs and push the remaining crate all the way to the right where you found it. Climb up on the small metal pole and then onto the crate. Extend your neck and climb up the ladder to the room above. The controls in this room are used to move the fuel tank. 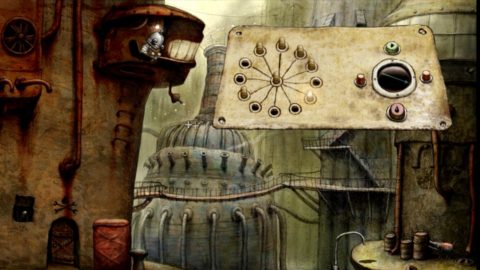 Quickly climb back down the ladder, drop down to the metal pole and then to the ground. Use the gun with the plunger to combine them together and then use the plunger gun on the robot dog as it’s licking the oil. Walk back to the left and give the robot dog to the lady in exchange for an umbrella.

Use the umbrella on the water pouring down to the left so you can walk around the path. You’ll end up on the bridge in the background. Walk up the steps to town.

Walk back into the bar and release the flies. While the bartender is distracted click on the oil barrel and Josev will drag it out to the drummer. The lady from the top window will smash a plant pot.

Go back into the oil bar and play 5-straight with the little robot sitting at the table. He’s quite easy to beat as long as you play aggressively. Don’t worry about what he’s doing, just always play to extend your lines as long as possible. This is a good starting position. 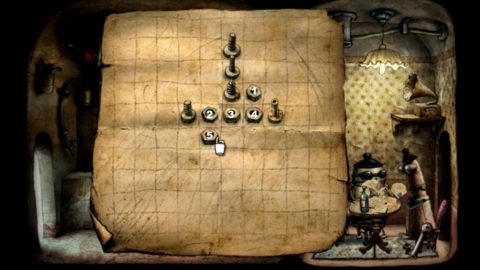 Each game may be a little different but just stick to your lines and make him defend. He’ll make a mistake and you’ll win the game. The little robot will be so angry that he’ll smash the board and send screws flying. Pick up the 5 screws and take them outside to the saxophone player.

The lady above will throw down a pot with a plant in it. Pick up the plant and then walk up the stairs at the back. Continue up the stairs to the right to the town center.

There are a couple of robots here. Talk to the old man robot in the wheelchair. He’ll give you a pot and ask for some oil. Walk up the stairs going up to the left. Climb up the back of the ladder to stand on top of the robot. Pull out the cord. 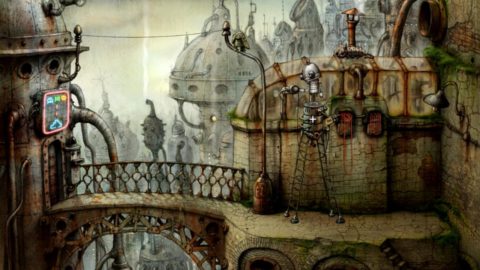 The robot will turn around to plug the cord back in. As he does so pull on the red cord dangling down to make a mess of it on the other side. The robot will move over to try and fix it.

Take a look at the panel at the base of the pole. This is a sliding puzzle and you’ll need to get the pieces in the right locations. As you play around with the puzzle a piece will fall out and the owl will swoop down to pick it up.

The owl will now follow you. Walk over to the left so that the owl sits on the electric wire. Extend and contract your neck until the owl falls off.  Pick up the puzzle piece and then click on the dangling electric wire to attach it to the fence. Go back to look at the panel.

It’s easiest to complete this puzzle without adding the missing piece as you’ll have two empty squares in which to move the other pieces around. The piece that fell off belongs in the top left corner. Here’s the final solution. 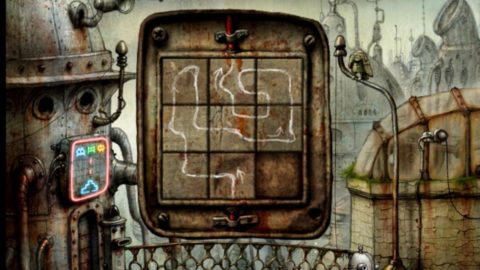 If you’ve attached the wire to the fence it will be electrified. Walk back to the robot on the ladder and climb up the back of him. Click on the cat to scare it away. It’ll get electrified on the fence.

Open the panel again and cut the circuit by moving one of the puzzle pieces. Now it’s safe to pick up the cat.

Walk back downstairs and then downstairs twice more back to the band members. Give the cat to the didgeridoo player. Once they all start playing the lady upstairs will throw down a radio. Pick up the radio and while you’re here walk through the door to the left. Use the can on the spot of oil and wait for the oil to drip into the can. Josev will pick it up once it’s full.

Walk to the right and then up the stairs at the back. Continue up the stairs to the town center. Look at the notes posted on the wall next to the old lady. Pick up the winding key which is on the brick wall just south of the central well.

Use the winding key on the hole to the right of the door. The clock has the ‘hour’ symbols in the middle and the ‘minute’ symbols around the outside. You want to set the clock to VII on the outside and ~ on the inside. 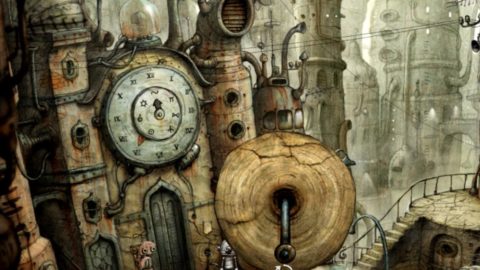 The lady robot will walk inside and you’ll be able to read the note that was posted behind her for the next clue. Use the winding key to change the time on the clock again. This time change the time to VI for the ‘minute’ hand and the symbol that looks a little like a 6 for the ‘hour’ hand. 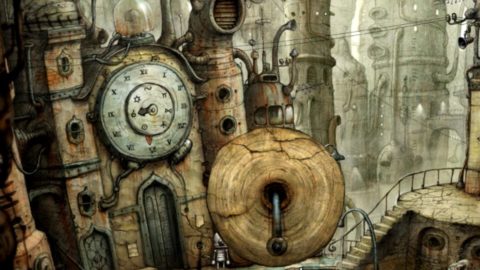 The man robot will come down from the tower and walk into the other building. Walk up the steps and into the tower. Take the speaker and then combine the speaker with the radio in your inventory.

If you haven’t filled the can with oil go back to the band members and walk through the door to the left. Place the can under the oil drip to fill it up.

Give the oil can to the old man robot. He’s feeling better but wants you to bring him some sunflower oil now. Grab the can from him once more and then open the hatch that was underneath him and climb down.

This room has a number of twisting pipes and a water tank to the left. Pick up the first red wrench that’s hanging on one of the pipes. Open the little shelf to the right of the screen and pick up the book. Flip through the pages to the end to find the second red wrench. In the center of the pipes is a little metal hook. Grab it and then walk down the ladder to the drain.

Use the little metal hook on the drain to grab the third red wrench. Walk back up to the pipes and click on the center of them to take a closer look. You need to place the wrenches in the right positions to stop the water flowing. Place one wrench on the top row on the left, one wrench to the right of it and the last wrench below the second. 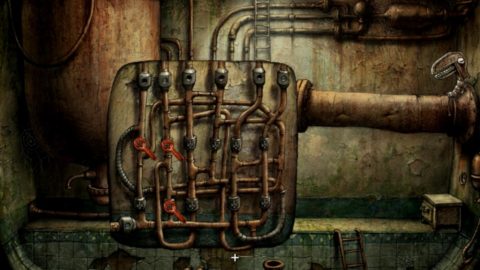 Place the radio on the shelf and Josev will plug it in. This will wake up the wrench robot. He’ll go over and unscrew the tank which will fill up the room of poker players with water.

Climb back up the ladder to the town square. Climb into the well which is now empty of water, open the hatch to the right and climb through the tunnel. You’ll end up outside the building on an elevator.

Press the red button on the wall and the elevator will descend. Have a look in the window to see what happened to Berta.